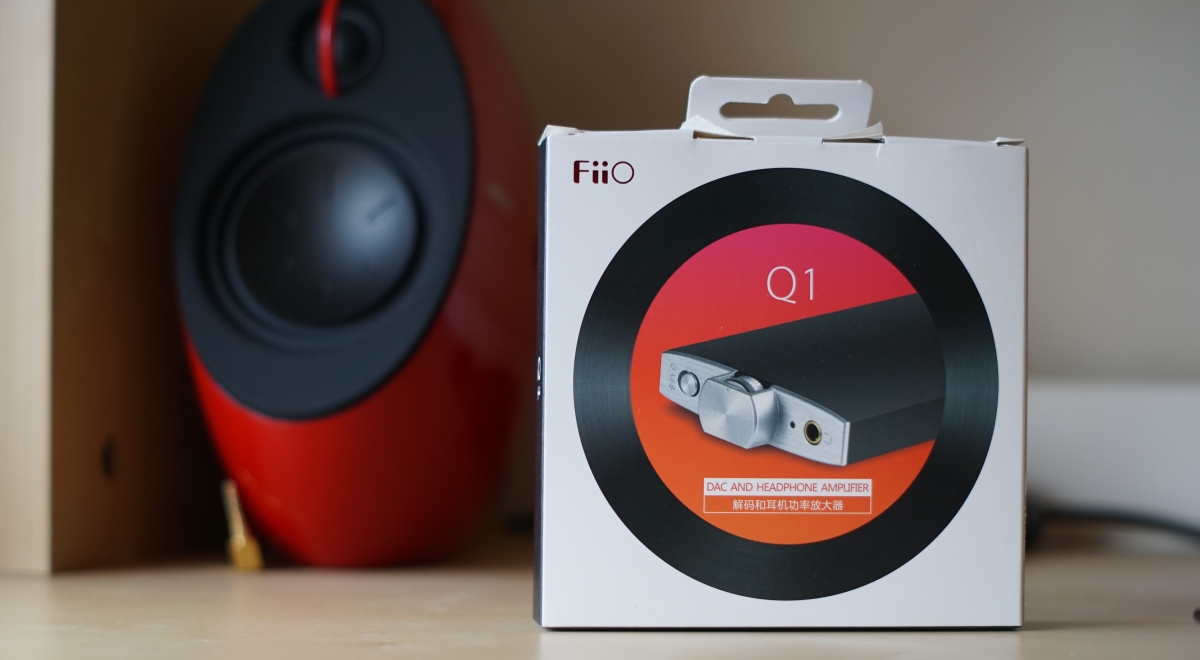 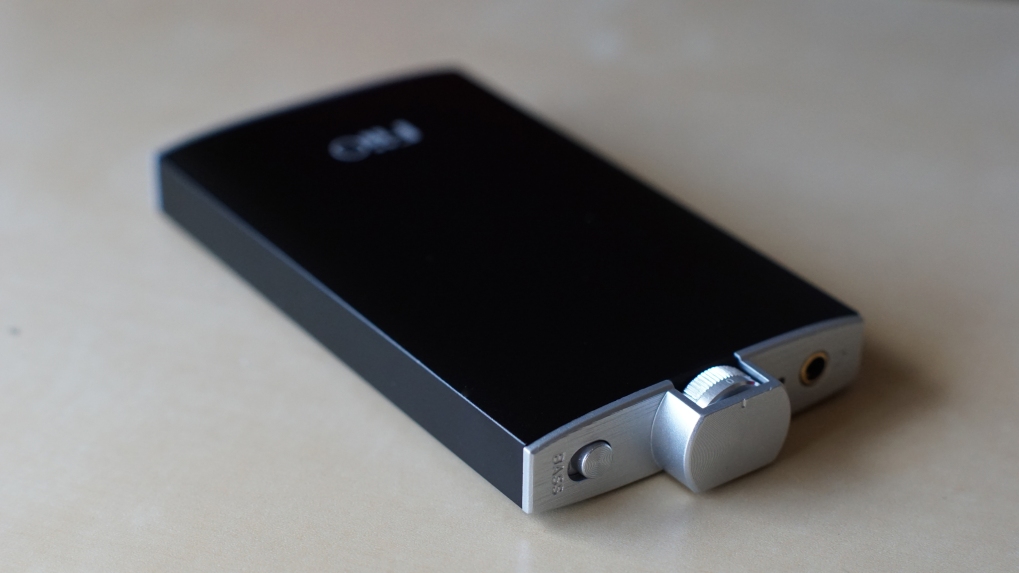 The Fiio Q1 is an entry level amp/dac, currently the cheapest in Fiio`s portable DAC lineup. It retails for $60 USD or $100 AUD and offers an affordable gateway into the world of high-fi sound. The Q1 has a 1400mah inbuilt rechargeable battery, a PCM5102 DAC and MAX97220 AMP chip, promising up to 30hrs of battery life and linear audio output with

About Me – Some background, Gear of choice, Preferences and Biases

I generally prefer a slight v-shape to my sound, but still closer to neutral. I like a lot of detail and clarity, but can appreciate a smooth, laid back sound such as that on the X10`s. I prefer a more neutral midrange within a relatively tight tolerance, but I`m probably more forgiving of brightness over darkness. I`m not particularly treble sensitive and can tolerate large amounts without fatigue, though too much ruins the enjoyment. If I use a different eartip/pad/cover during the review I will note that and describe the sound changes.

Why Buy a DAC?

The Q1 is aimed for beginners, so I`ll talk a bit about why you should purchase a dedicated DAC at all. At first, I didn`t believe in the need for a discrete DAC, I was perfectly happy using my phone and iPod along with my JDS Labs Cmoyy BB. Many sources on the internet stated how high end android phones/iPhones have good enough DAC`s and that it all sounded the same. This was not helped by the fact that most portable DAC`s cost upwards of $250 AUD and I was always under the assumption that that money was better spent on some good earphones or headphones, after all how much difference could the source make. So when the Q1 was released with the same DAC as the e17k at less than $100 AUD, I was intrigued and found time to visit Minidisc for an audition. Wow what a difference, when I first started using an amp, it made a small difference, but mainly it got rid of the source discrepancy with output impedance and hiss, but the Q1 made a real impact on the sound quality. Listening from my ie800`s, mids were cleaner, details were more apparent and the sound was more extended, sub-bass response was much improved. The dynamic range was far greater than my laptop and smartphone which made well mastered songs a treat to listen to. In addition you still interface through the ui of your favourite device but get to reap the benefits of a dedicated DAC/AMP, much better than a dedicated DAP in my opinion.

Just like designing speakers, where the subsystems can have a larger impact on the sound than the drivers themselves, using quality components is irrelevant if they aren`t properly implemented. Phones are getting a lot better, every iteration sounds a little closer to dedicated equipment and many manufacturers such as Samsung, Lg and Apple even employ DACs from Wolfson, Saber and Cirrus to provide better audio experiences. However smartphone audio is a niche market, 99% of buyer won`t even know the difference and with the new fixation on slimness and design, quality audio sections are becoming harder and harder to implement. A dedicated DAC will always sound better simply because there is a lot more space to house what is essentially the same circuit. The components will be better isolated, the manufacturer doesn`t have to worry about power constraints and they are willing to dedicate all their resources to quality audio components because they are providing an audio product (duh!). It really comes down to the fact that whenever you convert anything, there is loss, so a higher quality dedicated DAC (digital to analogue converter) will sound better, it`s not debatable like cable upgrades, it`s as scientific as it gets.

The Q1 comes in a small box with two silicone mounting films, a short interconnect cable and a micro usb cable. Fiio does not provide an OTG cable as the Q1 does not officially support this feature, however it has worked flawlessly with every phone I`ve tested, (Samsung Galaxy S4, S6 Edge, HTC One X, M8 and M7). If you get no audio, change the volume on the phone one notch and the phone will use USB audio pass-through. It`s a minimalist package, but Fiio didn`t even have to include cables for the price, not to mention, the box is much nicer than other Chinese equivalents and the manuals avoid the usual Chinglish. 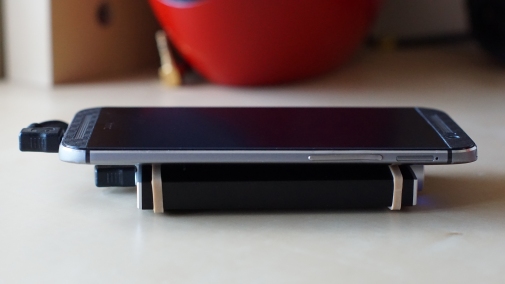 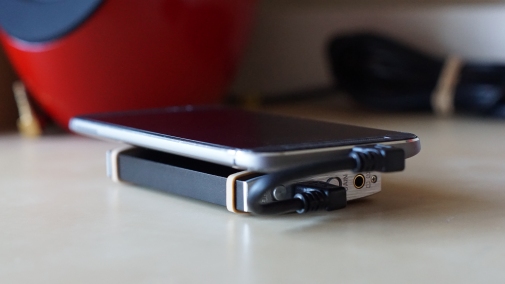 Although this term has been coined in so many other reviews, the Q1 can only be described as a flask. In fact on numerous occasions people have mistaken mine for one and tried to open it up! 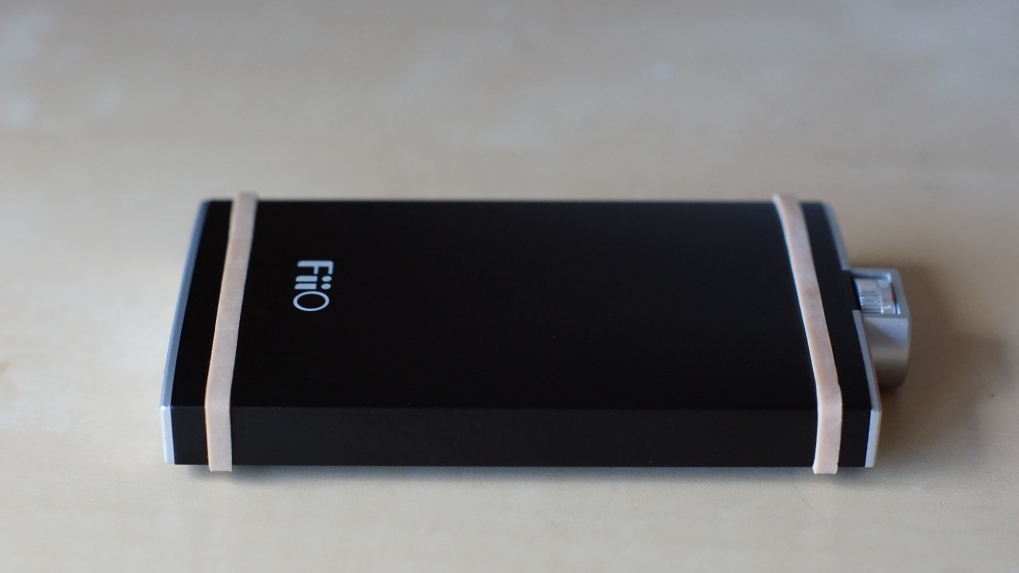 Although the Fiio Q1 is small (97mm x 56mm x 13.1mm) and relatively light weight (100g), it still manages to impress with a quality look and feel in the hand. The unit comes in one colour, satin black with brushed silver ends, the Fiio logo laser etched into the anodized casing. Over the last few months of varied usage, the housing still looks like new. It is fully constructed from aluminium and is well finished and ergonomic in the hand, unfortunately it`s not the most stable design and marrying it up with the curved back of my HTC M8 is a nightmare. I have partially alleviated this issue by using two flat rubber bands on either end that provides a bit more grip to the unit. Apart from that, everything is intuitive and well set out, the volume is not inclined to change in your pocket, though it is still possible to accidentally bump the knob. The volume knob is very smooth with a good amount of resistance, though the letters are hard to see and there is channel imbalance below 1 volume. 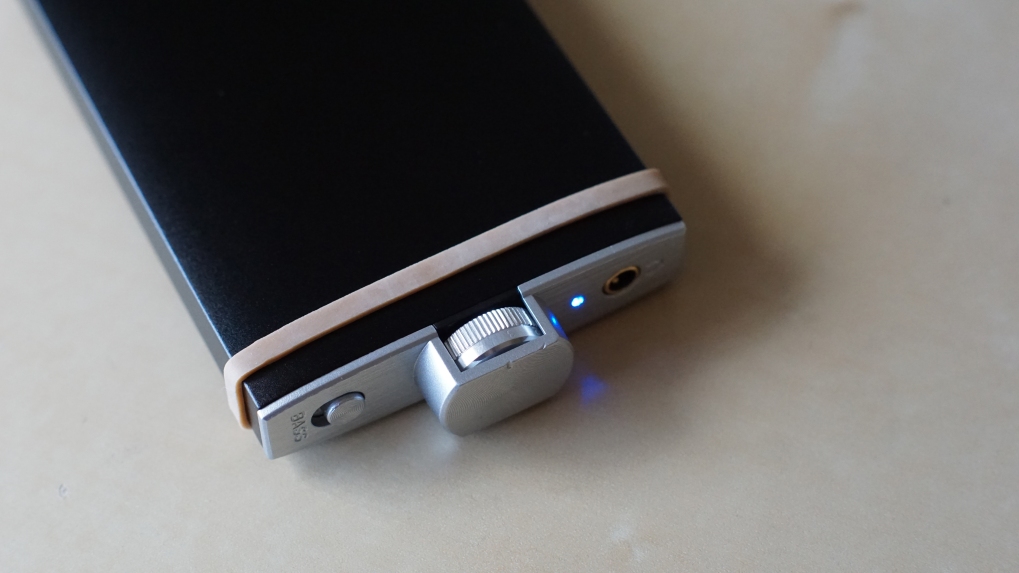 The switches are easy to change with a tactile concentric circle texturing. The front of the Q1 houses the 3.5mm output, the volume knob and the bass boost switch whilst the back has the line-in/line-out port (becomes line-out when using DAC functionality so you can bypass the internal amp if you choose), micro usb for connection and charging, gain switch and charge switch (for OTG). There is a status LED on the front that glows blue when the device is active, flashes purple (red and blue leds both lit) on low battery and red when the device is charging. 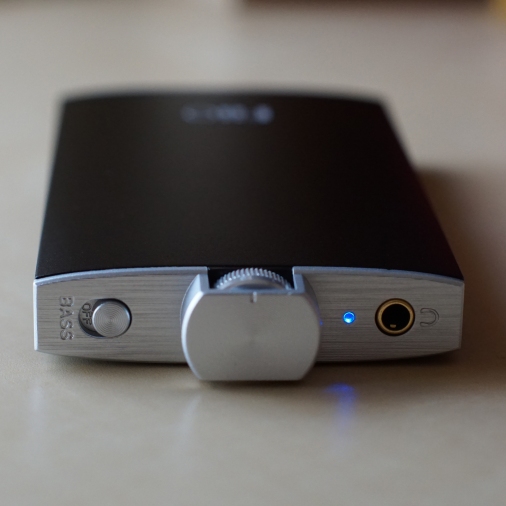 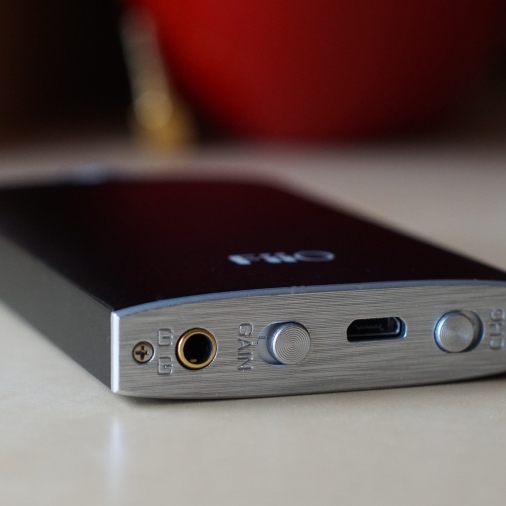 The battery life is fantastic on the Q1, Fiio claims over 30hrs of use and I frequently beat this claim on low gain, on high gain, batterylife is still great, around 20-25hrs of use depending on volume. Of note, the 3.5mm ports are all gold plated which is a nice touch, there is no crackling when the plug is twisted in the socket. One great aspect of this amp is that there is no pop when you plug/unplug the amp or plug/unplug your headphones, and no pop when the amp is turned on or off, it`s brilliant and very well designed. It`s a nice and portable package that feels well thought out, I would be happy if a $250 amp had build quality to match, it`s hard to believe that it costs less than a quarter of that.

Tonally the Q1 in DAC/AMP mode stays faithful to the Fiio house sound in that it`s slightly warm but mostly neutral. Bass is full and extended, maybe very slightly north of neutral, mids are clean and uncoloured, treble is detailed and clean. The amp section is good, not great, it`s not as clean as my Cmoy but I prefer the portability over the improvement in SQ when using the Q1 purely as a DAC, line-out to the Cmoy. It doesn`t have the sheer volume of a high end amp but there is absolutely no hiss, so in that sense, the Q1 is best suited to portable headphones and earphones and will drive any of them just fine. The Q1 has a well sized soundstage, but it`s not great, the Cmoy again produces a larger soundscape, so the amp section is probably letting the Q1 down. Clarity is good on account of the clean mid presentation and using the Q1 I notice more treble intricacies than any other non-dedicated source I have. Bass is quick over weighty and resolves a lot of rumble and low down detail. The sound is layered and vocal effects can be easily discriminated. Dynamics are great but I feel it can be better. On a whole, the experience is much better than just using my Cmoy BB, the Cmoy may be slightly better as an amp but the DAC functionality makes a larger difference to sound quality and the inbuilt amp is good enough. 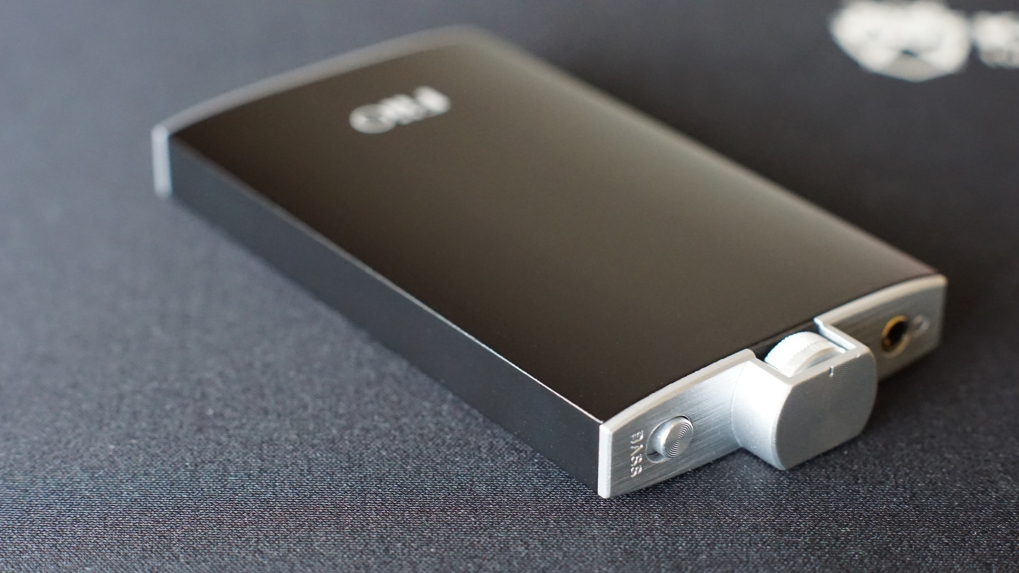 Accessories – 8/10, Comes with everything to get you started, could come with an OTG cable, but they are easily come by.

Design – 9.5/10, The build is flawless, volume knob could be tweaked a little to prevent accidental changes.

Sound Quality – 7.5/10 (10/10 for the price), Well integrated DAC, weaker amp section but good for portable use, plenty of volume in high gain and black noise floor is optimal for at home use too. Big improvement over stock DAC and pure amp.

Value – 10/10, The Q1 performs as well as Fiio`s old flagship gear, in fact it sounds very similar to the e17k (auditioned not owned), It costs as much as a DIY Cmoy kit but also includes a DAC and a quality streamlined housing.

Verdict – 10/10, I doubt any DAC/AMP offering at this price will provide nearly as complete a experience, the Q1 is a well rounded and mature offering from Fiio.