We live in an age where power boards have their own integrated USB ports and where 5-port chargers from brands such as Anker and Aukey have become a household stable. But beyond these home based gadgets, nothing beats the compact convenience of a basic wall charger when travelling.

These wall chargers are pretty standard with a 5, maybe 10 Watt output delivering 1 to 2 amps to your smart device respectively. Though more tech orientated buyers will probably invest in a 2A dual port charger as a lot of travelers carry both a smartphone and tablet. But this is where the limitations of this charging system are reached. Most manufacturers market these chargers at 2A, but in reality that’s 2A shared over the two ports, equating to just 1A each. Since most tablets require a 2A charger, charging both a tablet and smart device simultaneously is not possible. And that’s where the Archeer charger comes in.

I would like to thank Archeer very much for providing me with a charger in exchange for my honest opinion. There is no monetary incentive for a positive review, I will try to be as objective as possible during my evaluation of the product.

Archeer have a pretty typical non-fills approach to packaging that works well but doesn’t flatter the buyer. The dual charger is packaged within a basic cardboard box and nestled within a protective foam inlet that snugly holds the device.

Bearing an atypical 3.4A output condensed into a relatively compact frame, the Archeer dual charger produces 50% more output current than a conventional charger. It’s not a small charger by any means but is only slightly larger than a conventional quick charge adapter whilst offering 2 outputs.

A 3.4A max output makes it powerful enough to charge both a tablet and smartphone simultaneously or simply charge one device with quick charge like speed. Here’s what the output looked like after running a few benchmarks on my Nexus 9.

I’m not sure why it’s capped at 1A, but it’s likely due to my Nexus being on 81% rather than the charger itself. I didn’t notice any abnormally slow charge times during my testing.

There’s also a little more method to the design than the average charger. With a grippy matte finish and a black colour scheme, the device looks quite classy without attracting too many fingerprints. Archeer also outfit the charger with a small blue LED to denote power along with dimpled sides that make the charger much easier to remove from tighter outlets.

The charger supports 100-240V which will cover most international outlets and outputs at 5V with 3.4A shared between both ports (both have the ability to charge at the full 3.4A if the other port is free), meaning no quick charge support for Qualcomm devices. Nexus devices should be able to draw the full 3.4A through a single port.

Archeer integrate protection circuits against over-volting, short circuit and overheating. There’s also some smart charging technology similar to that implemented by Anker and Aukey chargers that delivers precise amounts of current to your devices rather than using inbuilt presets for the fastest, safest charge possible. 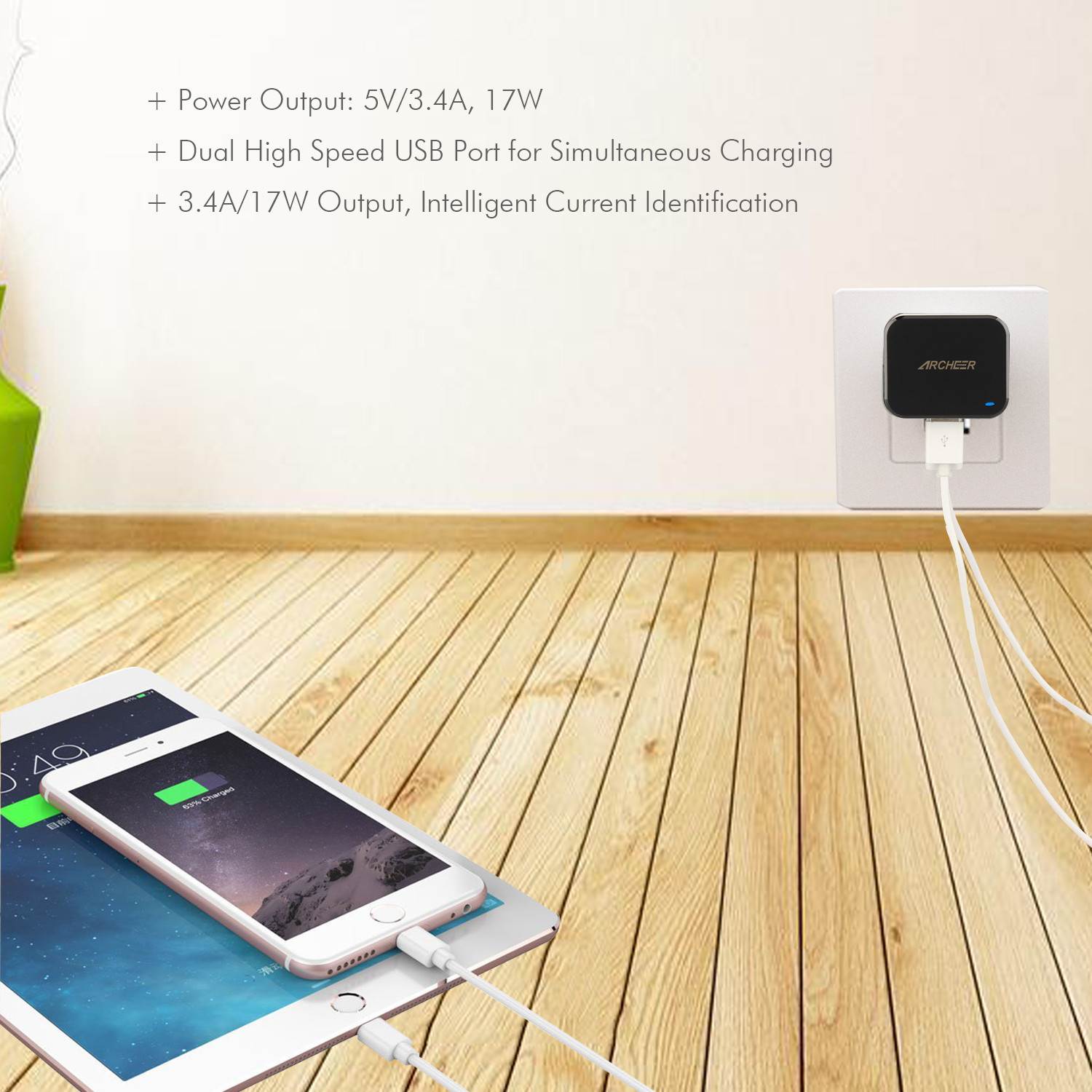 Whilst I lack the electronic expertise to empirically confirm these claims, charging times were similar to my 60W Aukey 5 port charger. Currently the charger is available with US (pictured), UK and European plug configurations. The US model is easily modified using a set of pliers to fit Australian outlets as pictured below, omitting the need for an adapter.

So overall, the Archeer Dual charger is a pretty convincing device. It has a solid feel in the hand and a nice build overall. The addition of a status LED, high power output and dual USB ports make it feel all the more premium. But these impressions have yet to factor in the price, which is perhaps the most compelling aspect of the charger. The Archeer 3.4A dual charger can keep all your devices topped up for $9.99 on Amazon for US customers and just $8 AUD for international buyers on Aliexpress. That makes it about 3X cheaper than the basic 1A iPod charger sold by Apple. The Archeer dual charger is a convenient, cost effective charger that is well suited to travelers and home users alike.