Mixcder have made an entrance on Head-fi with their economical but feature-filled products. While they might not be a household name, I’ve found their earphones to be both accessibly priced and competitive in performance. The X5 is one of their newest creations, a tough, sports-centric earphone with a meagre asking price of just $17.

I would like to thank Denise from Mixcder very much for her quick communication and for providing me with the X5 for the purpose of review. All words are my own and there is no monetary incentive for a positive review. Despite receiving the earphones free of cost, I will attempt to be as objective as possible in my evaluation.

About Me, Background, Gear of choice, Preferences and Biases –

I generally prefer a u-shaped sound that is close to neutral. I like a lot of detail and clarity but can appreciate a smooth, laid back sound. I’m not particularly treble sensitive so I may be more forgiving of brightness over darkness. I will note if I use a different eartip/pad/cover during the review and describe the sound changes.

The X5’s packaging is simple but practical with a small two tone box containing an instruction manual and hard case. Within the case lies the earphones, 3 pairs of silicone ear tips and 3 pairs of fins similar to those on Bose earphones that increase fit stability for activity. The included hard case is great, nicely sized and protective with a pocket on the inside to fold a few accessories.

The tips and fins are both of pleasing quality without deformity or moulding error though they are slightly stiff and hardly pamper the ear. The X5 while not the best presenting product, is again, practical and functional.

The X5 is a medium-large but well-sculpted earphone that exceeds its asking price in both looks and feel. The housings are entirely aluminium with nice solidity and a cool feel in the hand. The earphones themselves look hardy and perfectly assembled, they easily outclass the plastic Fiio earphones. 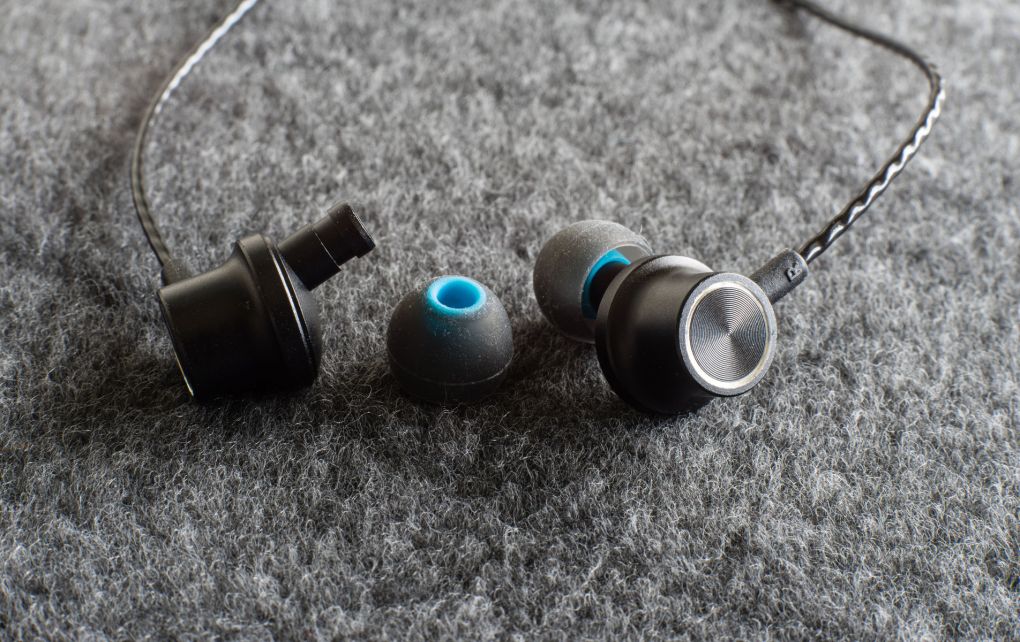 Comfort is quite good but since the earphones are a bit larger, they did form a hotspot at the backs of my ears after a few hours of listening. The nozzles are well-angled and quite thin, permitting moderate insertion depth. With the right ear tips, the earphones fit and sealed reliably. Isolation is just average due to small vents on the bottom and inner face of the earphones though they did suffice for public transport. Stability, even without the stabiliser wings was great though the fins effectively provided that extra layer of stability when running.

Unfortunately, the cable isn’t quite as flawless, it’s one of the worst I’ve handled even among budget earphones. The cable is plasticky and stiff with a lot of memory; even after a month, the cable has retained the kinks it had when packaged. At least the jack and earpieces have some strain-relief though the thin cable does not inspire confidence like the Kevlar unit on Fiio’s earphones or the fabric woven cable on the Pistons earphones. The cable is also really microphonic, they can easily be inverted and worn over-ear but are pretty awkward to wear inverted with fins when running. The cable has an inline remote and mic that worked reliably in my testing. The microphone quality was pretty decent, easily sufficing for calls and memos. 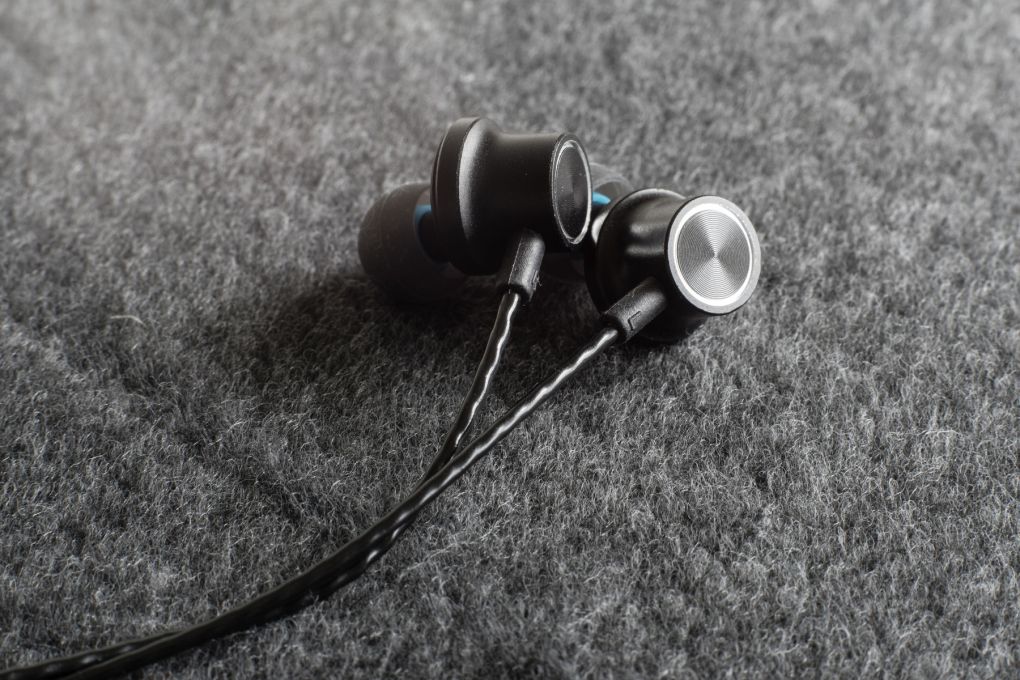 From first listen, the X5 was immediately quite balanced for such a cheap earphone. In particular, the X5’s really surprised me with their clarity and treble extension, without sounding overdone of course. And that’s important to note because my biggest gripe with the vast majority of budget earphones is their lack of refinement; for instance, having clarity with a warped midrange or sub-bass slam with a huge lack of definition and texture, all commonplace at this price. The X5’s are luckily devoid of either, stacking up reasonably well to models such as the Fiio F1 and even Xiaomi Pistons 3’s but they still lack the technical ability of earphones like the Fiio F3 and Xiaomi Hybrid Pro’s.

The X5’s are a v-shaped earphone with a brighter tonal balance. Treble has the greatest emphasis by a small margin though bass retains pleasing balance. The midrange is recessed though vocals remain clear even on more recessed tracks. The high-end can get a bit fatiguing during extended listening and isn’t the best suited towards high volume listening during activity though it is an engaging and reasonably resolving signature that performs well considering the asking price.

The X5’s have a surprisingly good soundstage amongst similarly priced earphone. Space is good, both width and depth. The earphones never reach beyond the head, but the sound is hardly congested or closed in either. Imaging is pretty decent though directional cues and layering aren’t clear as on more expensive earphones. Separation is mediocre, bass and treble notes, in particular, can get a bit smeared. The X5’s are certainly no worse than similarly priced models in that regard, however, and the darker F1 and Piston 3 both sound more congested than the clearer X5 and F3.

The low-end is characterised by tones rather than details and bass doesn’t have a whole lot of texture or definition; though most earphones around this price don’t particularly impress here either. Extension is moderate, they don’t quite have the sub-bass extension and slam of the Piston 3 or Fiio earphones though they do provide some rumble and kick to the lowest notes. Mid-bass has the greatest emphasis, producing some bass bloat, though spill is minimal and the bass never gets particularly sloppy or muddy. Bass is also pretty fast for a budget earphone, when listening to “Another Day of Sun” from the Lala Land OST, the X5 did a great job keeping up with the rapid bass notes which were easily muddled by the Fiio F1.

The X5 has a slightly unnatural midrange though the presentation is easily enjoyable nonetheless. Mid notes have great clarity and a sense of rawness that is quite revealing of details. The midrange has a brighter tonal tilt which puts increased emphasis on female vocals. This opposes the darker presentations of the Fiio F1 and Piston 3, making it a great alternative for lovers of pop, rock, Asian genres and acoustic. The X5 has far more clarity than both in addition to a little more resolution though the earphones can come off as overly thin and even slightly hollow at times. Detailing is good, similar to the F1 though the Piston 3 is slightly more detailed despite being less aggressive.

Treble tuning is quite unorthodox for a budget earphone with quite a forward middle treble response that makes the earphones considerably brighter than the F1 and Piston 3. The X5’s tuning is more in line with the more aggressive F3 and those looking for a more revealing, resolving and forward earphone will find the X5 to deliver in spades. Extension is very good for such a cheap earphone, better than the F1 and Piston and similar to the F3 and Hybrid Pro. High notes are very clear but lack a bit of crispness and separation meaning that high-end can get quite busy on a lot of tracks. Once again, clarity is really great to the high-end though treble notes such as cymbals, higher strings and high-hats can all sound a bit thin and strident. The earphones can get fatiguing at higher volumes, but for shorter sessions, the X5’s produce appreciably more detail and resolution to high notes that the F1 and Piston don’t even reproduce.

The X5 isn’t the most fantastic, flawless budget earphone I’ve ever heard and it doesn’t redefine my perception of pricing or value. But what Mixcder do provide is a nicely rounded experience that works stunningly well for its intended purposes. The included case is utilitarian, the metal build is nothing but solid and the silicone fins provide plenty of stability for activity. The X5’s also sound pretty nice, their quality is nice for the asking price and the brighter tonality provides a great alternative to the mostly darker, more bass focussed earphones on the market. I still don’t find them quite as refined as offerings from Fiio and their cable is pretty cheap, but the X5’s are a solid option for those with a more active lifestyle and listeners who prefer a nicely detailed, revealing tonality.

Verdict – 7/10, The X5 is a nicely revealing budget earphone with remarkable build quality. The cable quality is concerning and the high-end can get fatiguing, but the X5’s remain a balanced and feature packed earphone that should be a serious option within this price range.
The X5 is currently available from Amazon for $17 USD, please see the link below for the most updated pricing and availability:

A big technical jump with the same linear tuning, the Z7 is another leap forward in TWS design
Though one of the most modular earphones out there, the FD5 is extensively ear pleasing straight out of the box
Bold design meets musical sound on Burson's all-in-one Playmate 2
Cayin's latest IEM, the Fantasy, is their first DD earphone sporting a Be driver and dual magnet, dual chamber design