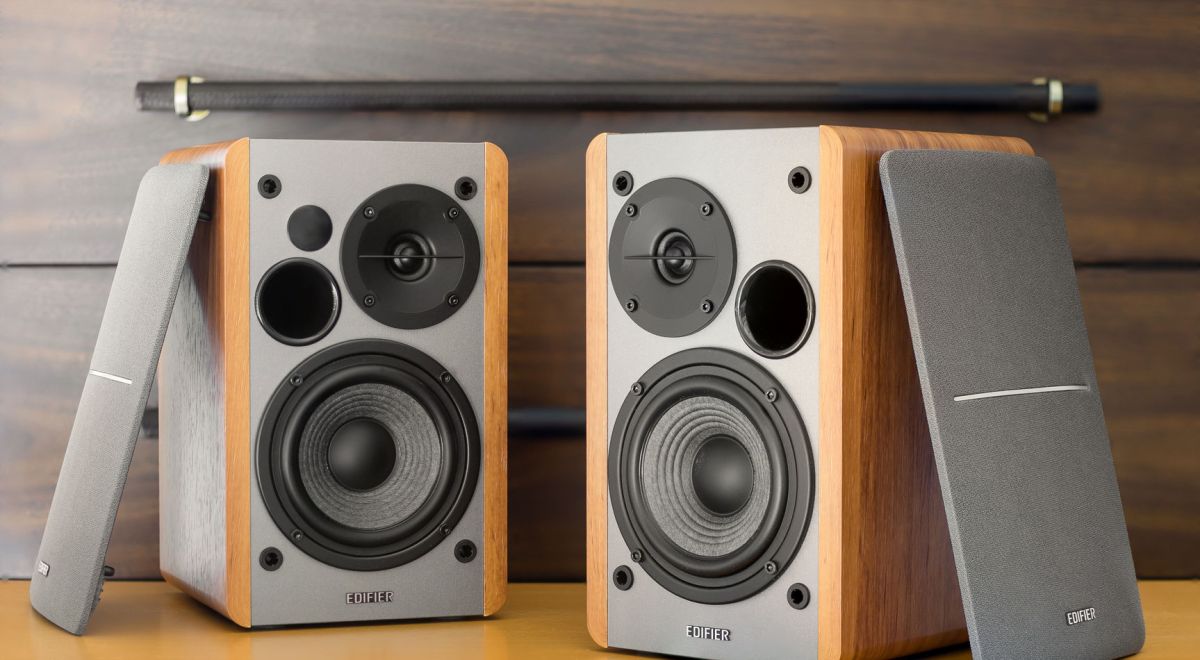 The R1280DB is a subtle update that well-suits buyers searching for a well-designed speaker with a pleasant tone.

In a market of constant inflation, it’s refreshing to review products like Edifier’s R1280DB that offers greater functionality than its predecessor at the same attainable $130USD asking price. An evolution of the R1280T that came before, Edifier’s acclaimed budget speaker now offers Bluetooth and supports digital inputs. Utilising the same design and driver setup, it offers a visually and sonically identical performance to the R1280T, though Edifier also offer a more svelte all-black model that looks a little more modern while retaining some nostalgic charm. With a combined 42W RMS output, they don’t offer wall shaking bass, but a sound that is cosy, smoothly textured and room-filling. You can read more about the R1280DB here and purchase a set for yourself here.

I would like to thank Amy from Edifier very much for her quick communication and for providing me with the R1280DB for the purpose of review. All words are my own and there is no monetary incentive for a positive review. Despite receiving the speakers free of cost, I will attempt to be as objective as possible in my evaluation.

The R1280DB is well-packaged in usual Edifier fashion. Compared to the R1280T, it has an extended accessory set reflecting its more flexible inputs and enhanced feature set. In addition to the speakers, the R1280DB ships with an IR remote, RCA to 3.5mm cable, RCA to RCA, optical cable and an interconnect cable that delivers power to the passive left driver. I admire Edifier for providing such a wealth of cables to take advantage of every input on the speakers. They could be of higher quality, but please for the price.

The R1280DB is almost identical to its predecessor which isn’t a bad thing at all. Despite their low-cost, the speakers feel solidly constructed and draw glances with their gorgeous wooden side panels. They’re compact for a bookshelf speaker, suiting a computer setup equally well. And their classic design ensure congruence with every aesthetic. Edifier also offer the R1280DB in black which better suits modern settings.

Protective fabric baffles come pre-installed from factory, though they’re simply clipped in place and easily removed. This reveals the dual driver woofer + tweeter setup underneath and front-firing bass port. Subjectively I find the speakers more eye-catching and a little clearer when baffle-less, but this is more a subject of personal preference.

As this is an active speaker requiring no external amplifier, all of the electronics are housing within the right unit. The control scheme remains the same as before, with 3 dials on its right face and inputs on its rear. The right speaker has an IR receiver on the front for the wireless remote, though the status LED remains on the right side which can be difficult to see when placed on a shelf.

The controls feel smooth and well-weighted, providing the ability to tailor bass and treble quantity to taste, or to suit the acoustics of the user’s particular setup. This enables users to achieve a balanced sound in rooms of differing volume and compensate for the bass increases experienced with corner placement. In addition to inputs, the rear houses a power switch and two spring loaded outputs that deliver audio to the left slave speaker. As is usual with Edifier speakers the power cable is fixed which can warrant the use of an extension cable or adapter for international buyers.

It’s here that the R1280DB most departs from its predecessor, offering far more flexibility with input. The most notable addition is Bluetooth, enabling wireless streaming. And, as with previous Edifier speakers, pairing and connection are both simple and reliable. Once powered on and set to BT from the remote, the speakers enter pairing mode. They also auto-reconnect with the last paired device where some speakers do not.

Once paired, the speakers delivered reliable audio with no stutter or intermittency. Range is good, they won’t stay connected between rooms, but easily have enough range to permit placement on higher shelves or across larger rooms. Though they don’t support low-latency apt-x, latency wasn’t an issue during my testing. The speakers were easily sufficient for films and videos with nicely synced dialogue.

The addition of Bluetooth opens up a few other possibilities as well. As the speakers now have an inbuilt DAC, they now accept an optical input, ideal for TV but also for those looking to squeeze a little extra sound quality from their setup. We also have a digital coaxial input which functions similarly with sources that don’t support optical.

The R1280DB has a warm, smooth low-end combined with a little extra treble crispness. As a bookshelf speaker, its sound is large and room-filling over tight and agile for near-field critical listening. When placed correctly, bass is surprisingly voluminous, predominately with regards to mid-bass, feeding into a natural midrange. Treble is clear but falls off quickly above lower-treble. As such, its sound best suits passive listening and film as it never fatigues even after hours of listening. Of note, though identical to the R1280T, I’ve since changed my speaker placement and have been able to eek out a little more sound quality than before, my impressions have been updated to match.

The R1280DB has a warm, mid-bass focused presentation that extends well into the depths of audible perception. That means this speaker set won’t provide the physical kick of a larger or similarly priced 2.1 system. However, what the R1280DB lacks in sub-bass extension, it makes up for with its lush, warm tone and well-articulated notes. It should be noted that, though front ported, the R1280DB is still placement sensitive so bass impressions will differ among users. As a rule of thumb, they achieve greater bass depth and emphasis when placed in front of a wall, and even greater impact when in a corner.

Even when placed in an optimal position, sub-bass is less present with the speakers conveying impact chiefly through heightened mid-bass. They still have a little slam at the very bottom, but don’t provide clear, concise rumble. On the other hand, mid-bass is impressively punchy and its emphasis grants the R1280DB with a pleasing fullness and warmth. Some bloat is apparent, and the R1280DB is neither the most agile or separated speaker. Notes are still fairly tight and their sound has a smooth texture permeating throughout. Ultimately, though the R1280DB is certainly more nuanced than something like the Logitech Z623, they still deliver a low-end that prioritises tone over fine detail.

Edifier excel with their midrange tuning and the R1280DB is no different. Its lower-midrange is slightly elevated, creating a slightly full-bodied presentation. By contrast, its centre midrange is quite neutral with vocals occupying a slightly laid-back position relative to instruments. Both male and female vocals remain clear and free of congestion or thickness. Female vocals are a little more emphasized with rising emphasis through the R1280DB’s upper midrange leading into an elevated lower-treble. It’s not a reference monitor, nor is the R1280DB warm and full to the extent of congestion, it simply provides a smooth, clear reconstruction.

As the speaker is smooth in its transitions and gradual in its emphasis, it maintains a natural voicing with pleasing timbre, especially considering their asking price. Their midrange is well-articulated without introducing sibilance and instruments sound well-bodied without becoming muddy. Vocals still lack a little intermediate density; slightly chesty below and slightly more articulated up top but without accurate size in-between. And, like its low end, the R1280DB’s midrange isn’t the most detailed or revealing I’ve heard, but its smooth, natural sound achieves a harmonious balance between natural warmth and enhanced vocal clarity.

Physically speaking, high-frequencies are the hardest to reproduce and the area where many affordable speakers/headphones/in-ears falter. It can be hard to detect a deficit here unless coming from something that does provide a very extended high-end, systems that usually cost a lot more than these. In accordance, to complement their larger woofers, Edifier employ more agile 13mm silk-dome tweeters on the R1280DB that promises a pristine high-end. And in listening, the R1280DB produces a crisp, clear and nicely detailed high-end that invigorates their sound with energy and clarity.

This mainly stems from their elevated lower-treble, that contains the bulk of instrumental information. This grants cymbals, strings and high-hats with nice attack and I find the speakers to excel especially with acoustic. However, the R1280DB rolls off fairly early, suffering from a lack of extension above leading to slightly truncated shimmer and a lack of air. They have quite a clean background as a result and don’t sound explicitly bright despite their clear presentation. And even if they aren’t the most resolving speaker, I would still consider the R1280DB to be one of the more detailed models around this price, its balance augmented by its more aggressive nature that brings intricacies to the fore.

R1700BT ($150-200): Edifier’s midrange model arguably offers the best price/performance in their line-up. It’s a considerably larger speaker than the R1280DB but also offers a noticeable bump in quality. It carries the same style of sound, with a mid-bassy low-end and clear midrange though it has an airier high-end on account of its superior end to end extension. Bass is immediately more physical and extended. It’s not the most articulate, but is more robust and controlled than the R1280. Its midrange is more substantial, still clear but with greater density and layering due to their extended bass and more linear midrange signature. Highs are most notably improved, their eagle-eye tweeters bringing greater extension and with it, higher resolution and enhanced air. This aids clarity and separation throughout making the R1700BT easily the more detailed speaker and one with superior retrieval of micro details.

The R1280DB offers greater functionality than its predecessor while sporting the same natural sound and approachable price tag. They’re also just as visually captivating with the introduction of a more subdued black scheme better suiting a modern setup aesthetic. They may not challenge pricier models in sound quality, but their smooth, refined signature demonstrates far more maturity than one would expect from an affordable speaker. 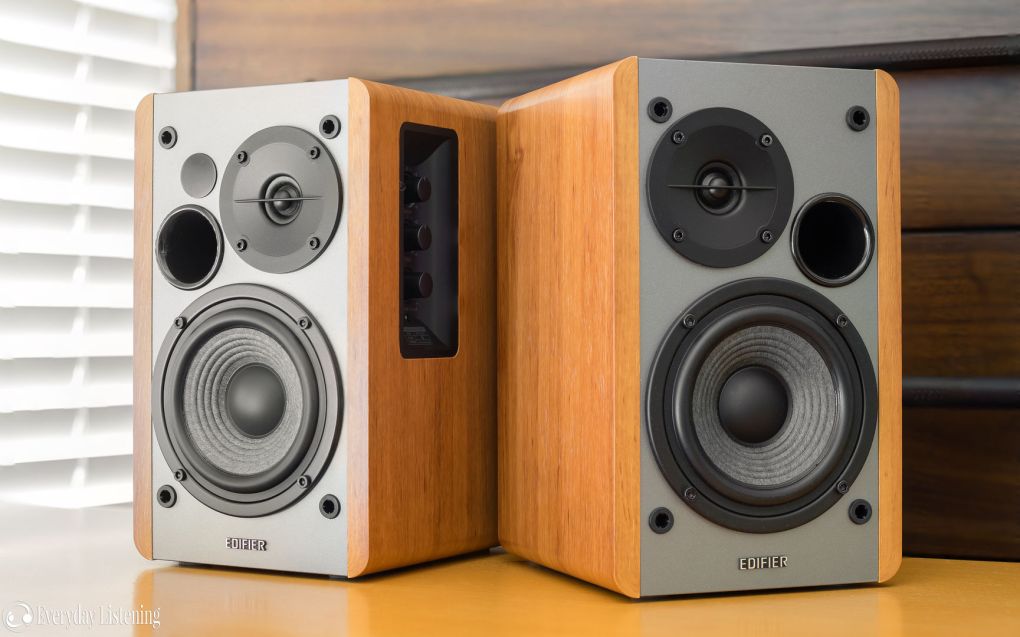 The addition of Bluetooth and digital inputs heightens their versatility, enabling more flexible placement and use with a wider range of devices such as a small TV setup. The R1280DB isn’t a revolution, but a subtle update well-considered for its target demographic. Buyers searching for a well-designed speaker with a pleasant tone will find much to love with Edifier’s new R1280DB but those looking for something a little more discerning will want to investigate Edifier’s higher-end R1700BT.

The Edifier R1280DB is available from Amazon (International) for $129 USD and Amazon AU for $148 at the time of writing, please see my affiliate link for the most updated pricing, availability and configurations.