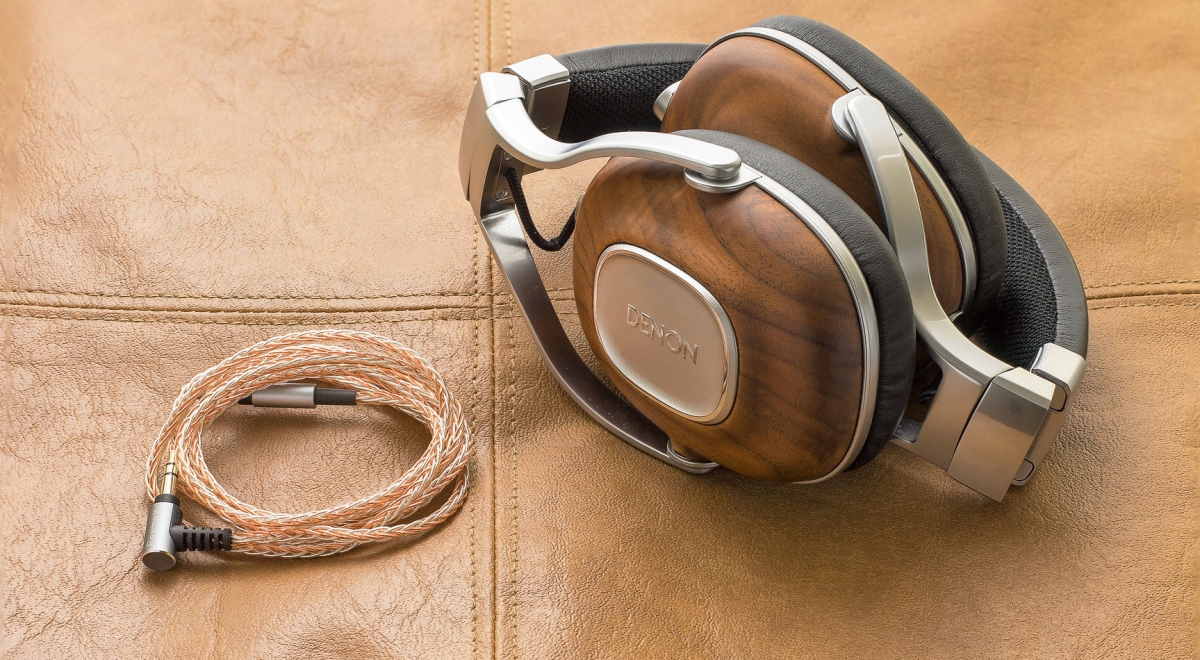 I’ve formed quite an affinity for portable headphones, chiefly Denon’s MM-400; a highly overlooked headphone with a gorgeous aesthetic and ear-pleasing sound. However, if I had a main complaint, it would be its rather paltry stock cables, both thin, rubbery units with minimal strain relief. The same can be said for many others with even the highly regarded Oppo PM3 shipping with a fairly standard rubber cable. As headphones designed for portable use during commute, they feel poorly equipped to deal with the rigours of daily life. Earmax propose a solution with their 8-core 7N silver plated cable priced at just $30 USD. Despite its asking price, the cable is sleek in design with a well-considered build. You can read more about the cable and purchase it here.

I would like to thank Yan for getting in touch and providing me with Earmax’s silver plated cable for the purpose of review. All words are my own and there is no monetary incentive for a positive review. Despite receiving the cable free of cost, I will attempt to be as objective as possible in my evaluation.

The cable isn’t the beefiest unit out there, rather assuming a more streamlined form factor suited towards portable use. It has a similar thickness to most stock cables so it doesn’t weigh down the attached headphone. Its 8-core braid feels super supple and, as its jacket has a smoother texture, the cable also doesn’t catch on clothing and is easily untangled. Moreover, its loosely braided design produces notably reduced microphonic noise compared to traditional cables.

I’m also a fan of the cable’s design, its transparent insulation revealing the intertwining copper and silver conductors below. It’s an intriguing aesthetic that feels far more complementary on premium portable headphones than the standard black rubber units that come from factory. On a side note, the connectors also have a metal exterior that feels tactile and blends perfectly with the silver trim on the MM-400’s.

The cable also impresses in its construction. Obviously, at this price, buyers won’t see custom components, but Earmax do terminate the cable with a nicely relieved right angle plug. The plug is also case friendly and low-profile for convenient pocket use. Up top, Earmax offer a variety of connection options, I went with a standard TRS 3.5mm plug in my configuration. 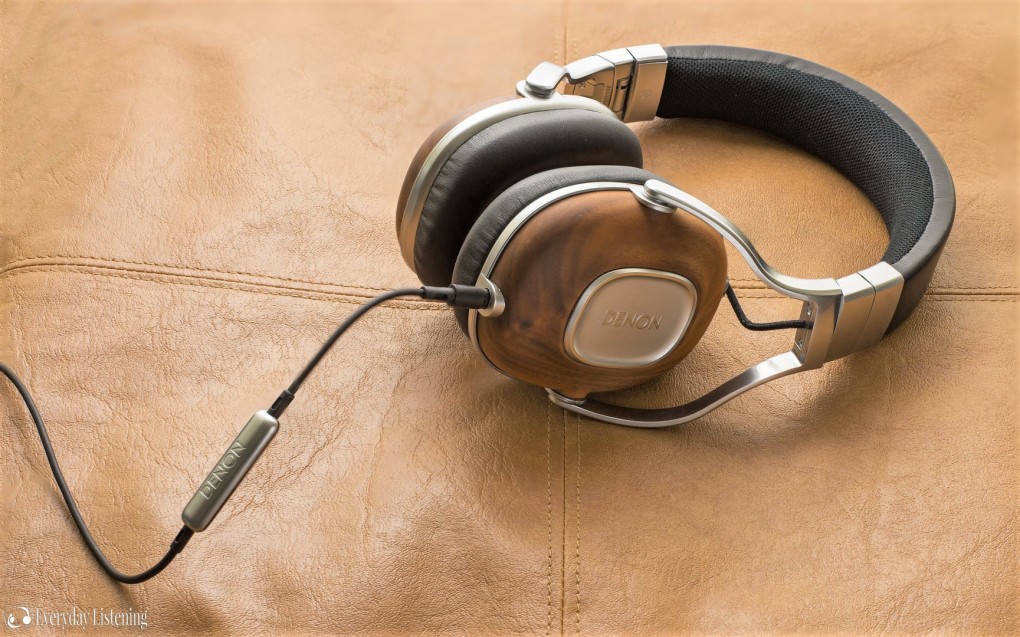 Some portable headphones tend to be picky about their plugs, especially the MM-400 as it has a recessed, oval plug. The slender, offset plug on Earmax’s cable is among the few that will fit without issue. The same goes for Oppo’s, V-Moda’s and most other portable headphones though Bowers and Wilkins use a proprietary 2.5mm connector that is not supported. Of note, though similar in design, it is not identical to the unit included on Astrotec’s high-end earbuds.

I spent a few hours AB-ing the Earmax with the stock cable running from the Fiio Q5 (that has a low sub 1ohm output impedance) and felt that changes to sound were apparent. Please note that this isn’t a transformative upgrade, but an alteration, the extent of which also depends on the quality of the stock cable. The differences will also vary by source and those running from one of higher output impedance may not notice changes at all. Comments below are in reference to the stock Denon MM-400 cable. 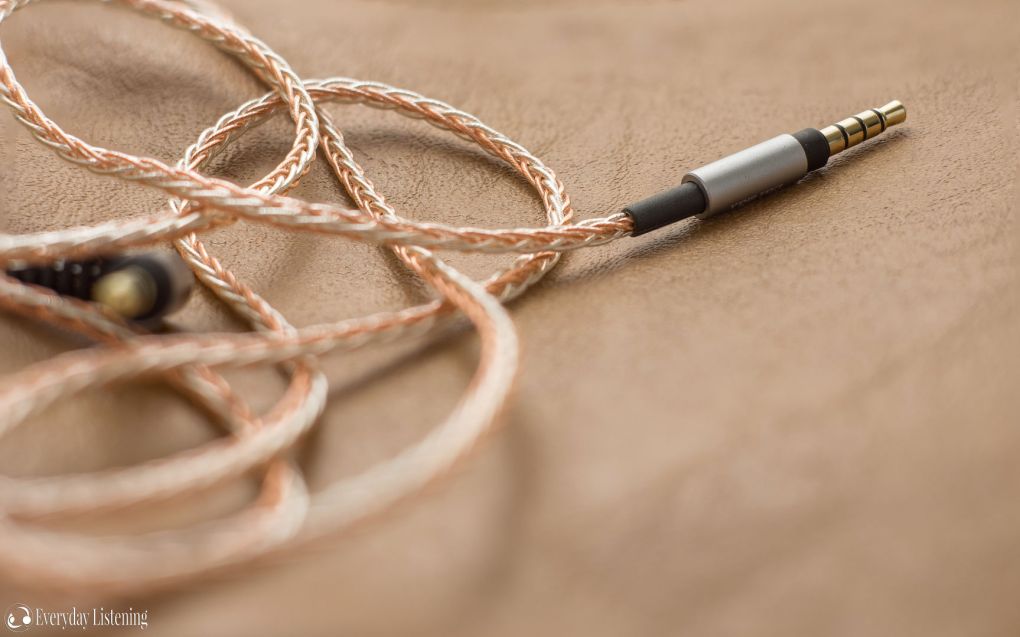 The Earmax cable has a slightly brighter signature that finds great synergy with the warmer MM-400 (and many other portable headphones for that matter). Its presentation is clean, its tone slightly cool. And though the cable doesn’t expand the soundstage to a notable degree, it does enhance its properties. In particular, its greater midrange transparency and separation enable a considerably more layered presentation and with it, greater background detail retrieval. These features culminate to produce a noticeably more accurate presentation though, of course, one that doesn’t always find perfect synergy with every headphone.

Differences within the low-end aren’t night and day, but they’re pronounced enough to be immediately noticeable. Bass is slightly cleaned up, primarily on behalf of slight mid-bass attenuation that provides more accurately sized notes and a cleaner tone. Sub-bass also loses a touch of presence, but extension remains impressive, retaining solid impact at the very bottom. As a result of the cable’s cleaner presentation, bass is more defined and separated. I also hear slightly faster decay, producing more concise notes and greater dynamics that flatter more monotonous tracks.

The midrange changes were most pronounced to me, mostly due to an increase in vocal clarity and, similar to its low-end, a slight decrease in warmth. Again, I found this to complement the MM-400 very well, as it can sound a little too warm and full-bodied at times. With the Earmax cable, lower-mids are attenuated, enhancing male vocal definition. The cable has little effect on the centre midrange, with similar vocal presence and positioning, though upper mids have slight elevation. Accordingly, the cable nicely balances darker, warmer headphones, providing greater transparency and clarity. However, it also won’t be ideal for already brighter, thinner headphones such as the B&O H6.

Highs are also slightly enhanced, most notably with regards to extension. Lower and middle treble have a slight bump in quantity, heightening detail presence and delivering a crisper presentation with greater air. The result is a sound that’s not only more detailed, but also clearer and more articulate in its delivery. Finer nuances are more apparent and extension is notably improved, aiding resolution throughout. There are exceptions, portable headphones tend to sound quite intimate by nature of their form factor. This cable doesn’t append that but does enhance traits that culminate towards a more coherent, detailed presentation.

I don’t often pay much attention to headphone cables, especially ones such as cheap as this. However, colour me impressed! Earmax’s cable is not only incredibly ergonomic, it also has a clean, separated and slightly more revealing sound that finds great synergy with the majority of warmer portable headphones. Unfortunately, the cable isn’t offered with an in-line remote/mic and some may be sceptical of sound changes. However, at just $30, the cable provides a strong build, a super supple, tangle-resistant 8-core construction and a striking aesthetic that complements premium headphones.

The cable can be purchased from Aliexpress. I am not affiliated with Aliexpress nor the individual seller and receive no earnings from purchases through this link.

Leave a Reply to AdamCancel Reply