The Khaki King keeps accurate time and its timeless design holds confident presence on the wrist amidst modern, classic, casual and formal settings.

Born in 1892 within the US, Hamilton achieved renown manufacturing timepieces during the railroad expansion. Their quality and competitive pricing quickly secured Hamilton’s standard wrist watch issuer during WWII through to the Vietnam era. They were later acquired by the Swatch Company in the 1970’s where they remain today. The result is a manufacturer that explodes with rich American character while maintaining the surgical precision of a Swiss masterpiece. A hallmark of Hamilton’s automatic products is their excellent value, with sleek designs realised through meticulous finish.

They achieved more mainstream acclaim through feature in several motion pictures including Stanley Kubrick’s 2001: A Space Odyssey and more recently, Christopher Nolan’s Interstellar. The Khaki line-up harkens back to Hamilton’s original military field watches with a clean yet utilitarian design. The King represents a slightly dressier proposition with its enclosed crown, slender profile and exclusive choice of leather and metal bands. However, it still appeals with a sporty face characterised by bold type and a day/date display that breaks symmetry in favour of identity. You can read more about Hamilton and the Khaki King here and purchase one for yourself here.

I paid full price for this watch from Jomashop with no obligation for review. This post is purely informative and a creation of my passions; writing, photography and a newfound appreciation of horology.

Though unequivocally derivative of Hamilton’s Khaki Field with its bold, high-contrast face, the King exudes a more luxurious aura with its sweeping lines and leather band with contrast stitching. Concentric ridging draws the eye to its subtly reflective dial adding dimension to its aesthetic while sword hour and minute hands in addition to a tall, slender second hand convey elegance. Lume covers the hour and minute hands, tip of second hand and 12 hour markimma. This is not a strength of the King, clearly a step down in luminance from the excellent lume on Seiko’s watches. Still, the King makes up for this in other areas, its stainless steel construction showcasing a high level of intricacy and a range of finishes; all contributing to a sophisticated and eye-catching design.

A hallmark feature of the King is its large day/date display that breaks the symmetry of its otherwise elegantly styled dial. Its bold type is very legible at a glance and it’s a look that’s distinct and functional – though I can understand how some would not appreciate the truncated 11 and 1 hour numerals. The watch measures 40mm in diameter and 48mm lug to lug making it well suited towards smaller wrists. Its slim 11mm profile and tapered design easily slide underneath cuffs and its curved lugs aid ergonomic wear. The contrast between brushed sides and polished bezel and crown is mesmerising in the best possible way, especially with the stock band’s complementary brushed Hamilton branded buckle. The King accepts 20mm bands and the nature of its design lends it well towards a variety of aesthetics; crocodile leather infusing a dressier appearance and nylon, a more casual one.

The King’s rounded sapphire glass melds with its tapered bezel, it looks and feels great though a lack of anti-reflective coating does produce some glare in direct sunlight. Of note, sapphire measures 9 out of 10 on Mohs scale of hardness with Quartz measuring 7 and standard tempered and chemically reinforced glass struggling to exceed 6. As materials can only be scratched by other materials harder than themselves, this translates to superlative scratch resistance during daily use. The same cannot be said for the King’s stainless steel housing that is sturdy in the hand (and on the wrist), but scratch prone nonetheless due to the nature of its finish. Its brushed finish becomes scuffed by movement opposing its grain, especially when changing bands, and the polished bezel accumulates micro scratches. 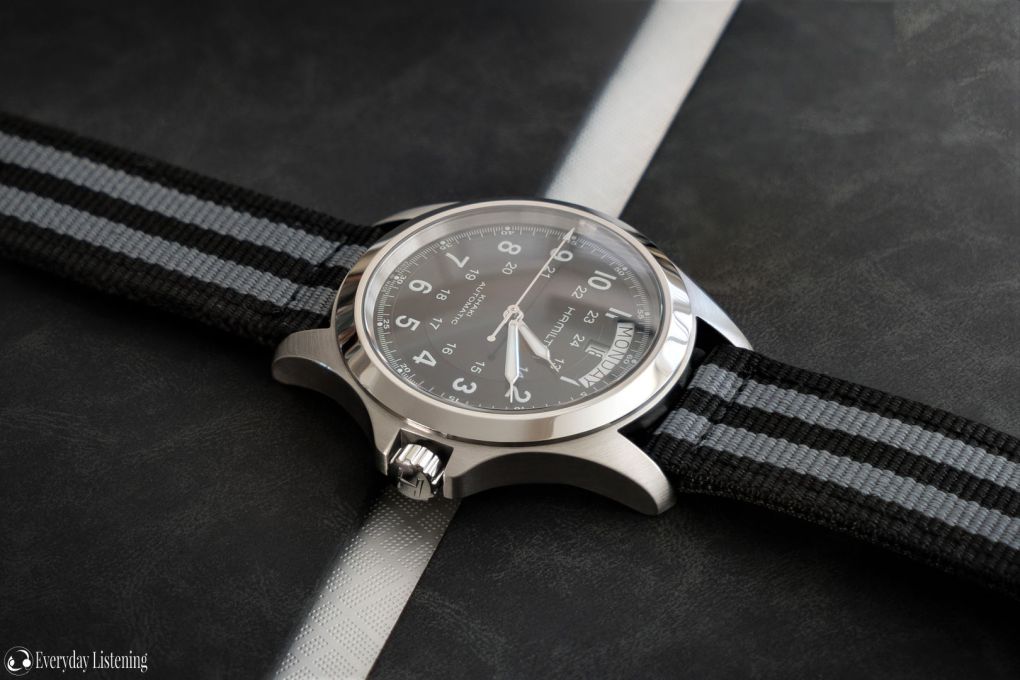 Luckily, these cosmetic imperfections are just as cheaply and easily removed by rubbing a dish sponge in the direction of the brushed finish or via gentle polishing with a Cape Cod cloth. And some would argue that these are marks of character and personalisation, the Citizen Eco Drive I dailied for almost a decade prior to the King would attest to that mentality. The King has a 5 bar water resistance rating, or about 50M. A lot forget that this is 50m in stationary water meaning the watch will fare fine during light submersion and the occasional wash or rain storm but is definitely not suited for water activity of any kind.

The display-back is mesmerising, offering a window into Hamilton’s proprietary H-40 movement. Compared to the cheaper SNK809, the H-40 movement is clearly more intricate and produced to a higher level of finish. It doesn’t make a statement as more boutique watches do, but it’s still easy to geek out over and something that first allured me, and no doubt many others, to the hobby. It’s much easier to appreciate the extensive design and engineering that goes into every watch when you’re able to view the intricacies within. The Khaki King demonstrates a high level of finish and intricacy that few similarly priced models can match.

The H64455533 is a self-winding automatic watch. First generation King’s utilised the renowned ETA 2834-2 Swiss movement, however, newer batches come installed with Hamilton’s customized variant, the H-40. It’s a 25 jewel movement with hacking, Hamilton is keen to showcase that the movement and watch are still Swiss-made and all the connotations of quality that moniker brings. Mechanically, they have removed regulating pins in favour of greater accuracy and reduced variation between units. I can confirm this in my subjective testing, with my unit gaining just 2 seconds per day, gaining 1 minute in one month. Another change includes reduction of the beat rate from 28,800bph to 21,600bph or 4Hz to 3Hz. This translates to a slightly choppier second-hand sweep but also double the power reserve at an unmatched 80hrs. 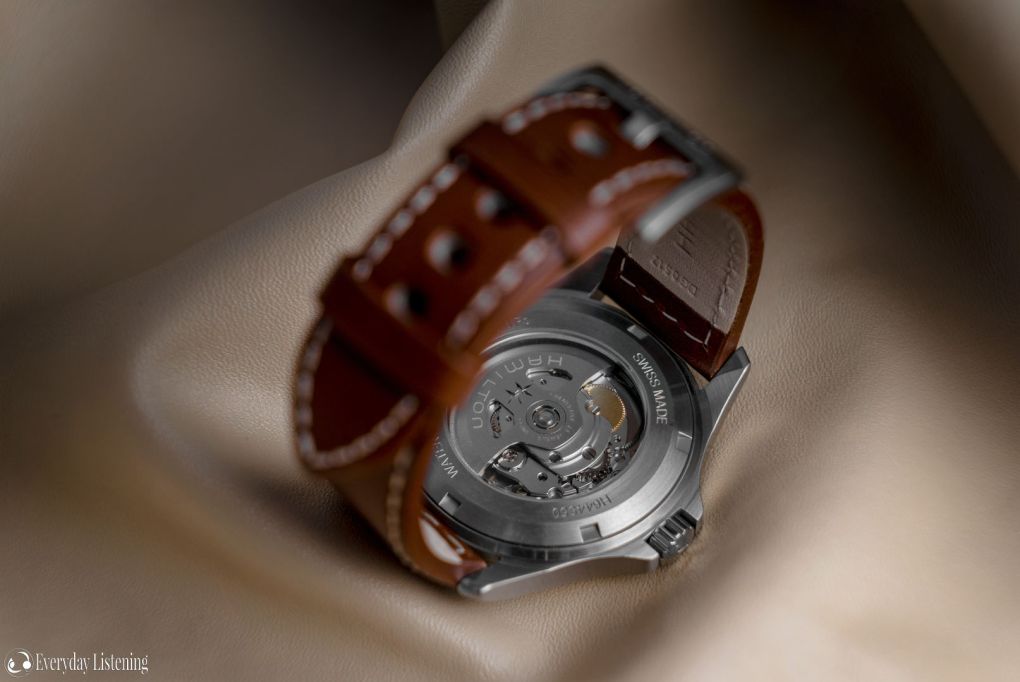 When compared to the 40hrs of the original and even the 50hrs of Seiko’s 6R15-based SARB watches, the Hamilton represents a strong proposition for those who like to rotate several watches, or perhaps just a little extra leeway for the forgetful! I can’t comment on servicing as I haven’t needed to do so, however, consumers would likely find more centres specialising with the more widely supported ETA movement than the proprietary H-40. In return, its lower beat rate should significantly enhance longevity due to reduced wear and tear. Still, though sacrificing convenience and smooth sweep, the H-40 is a very thoughtful revision of the iconic ETA 2834 both in terms of functionality and reliability. 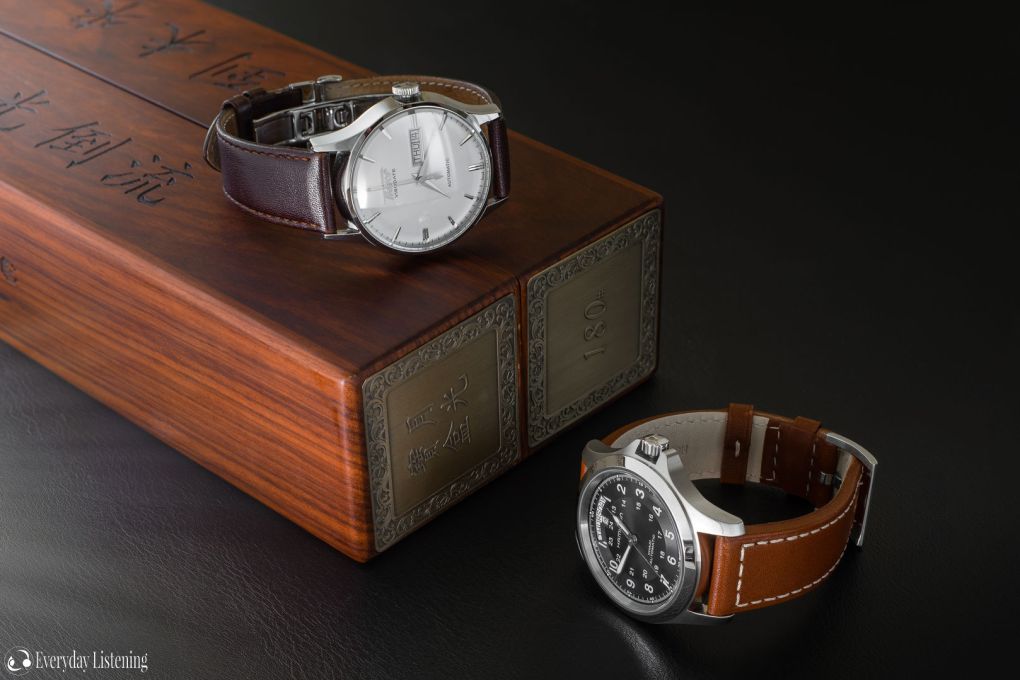 Tissot Visodate: The Visodate is a similarly priced watch. It’s more of a clear-cut dress watch with a similarly thin profile (just slightly thicker at 12mm) and a more minimalist styling, especially with regards to its face. Both watches take 20mm bands and sport curved lugs that follow the curvature of the wrist. The Visodate’s leather band is thinner with a more aggressive texture and its case lacks the protective bezel of the King in favour of a larger face. Both feature domed sapphire glass that is highly scratch resistant and neither watch have an anti-reflective coating, producing some glare under sunlight.

The Visodate’s face is considerably cleaner and subjectively more elegant with greater negative space and a lack of any Arabic numerals. Both watches employ a stainless construction that feels immensely solid though the Visodate has a polished finish all around where the King carries a more utilitarian aesthetic with its brushed sides. Both watches have a day/date display, the Visodate a more compact implementation similar to Seiko’s automatics. Utilising the ETA 2836-2, the Tissot is comparable to the original King, featuring its smoother 4Hz second-hand sweep. However, it also carries its shorter 42-hour power reserve as opposed to the 80 hours on the Khaki King. Both watches should be similarly precise in theory though; my particular King is slightly more consistent. The Visodate has a subjectively nicer display-back with bronze rotor while the King has a skeletonised rotor that permits the viewer to see more of the movement.

These watches most differ by their intended uses, the Visodate suiting formal dress, the King being a little more versatile between casual and formal wear. Still, the King lacks the clean elegance of the Visodate and its day/date display is notably polarising. Regardless, these watches represent two excellent propositions around $400 USD, offering reliable swiss movements and charming designs with their own unique appeal. Both watches also showcase a high level of finish and each brand carries a rich history.

At $400 USD, the King isn’t a cheap watch and it is functionally inferior to essentially any digital quartz watch. However, in addition to a fine timepiece, buyers are also buying a product that carries a rich history, gorgeous design and premium BOM. In that sense, it represents great value. Amongst mechanical watches, it keeps very precise time and its face is very legible at a glance, perfect for commuters. A sapphire glass face grants some peace of mind during daily use and its stainless steel housing has held up well during my past 6 months of use.

The Khaki King, like any good timepiece, has a timeless design that holds confident presence on the wrist amidst modern, classic, casual and formal settings. Versatility is one of its main assets. So would I buy this product myself at full price? That’s likely the question in every reader’s mind when they read any review of some costly product. I did buy this watch, so my response is a resounding yes. The King has become my daily driver and will likely continue to be one of my watches of choice for years to come.

The Khaki King can be purchased from Amazon for $380 USD at the time of writing. Please see my affiliate link for the most updated pricing, availability and configurations.