Inearz is a CIEM manufacturer from Florida, USA. Like many of the greats in the high-end space, the company has deep roots in the professional audio scene, with various offerings for stage monitoring and audio engineers. As such, you won’t hear about them quite as much in the audiophile scene yet make no mistake, this is not for lack of quality. This has been made apparent by their recent push into consumer audio, with their universal Zen models being very well-received alongside some of their more serious models from their CIEM lineup. The Utopia is their latest and highest-end model; its name denoting a state of perfection. It utilises a sophisticated 10-BA setup with 3-way crossover – 4x low, 2x mid, 4x high to deliver a unique voicing with immensely powerful bass set to all the control and detail its 10-driver setup would suggest. As such, this is a sound for the bass-lover and one that has few direct competitors. The Utopia has a $1599 USD RRP but is on sale for $1200 at the time of writing. You can read more about the Utopia and customize one for yourself here.

In addition to making some gorgeous customs, Inearz offers all of their models as universals as seen here. The uni shell is customizable in the same way as their customs, though I found their pre-configured design with white shell and smoke faceplates to be very appealing. What can be observed here is excellent transparency, perfectly smooth mating of the faceplate to the shell and a very neat internal structure that looks well-equipped to deal with the bumps and scuffs of professional use and abuse. The quality of the finish also speaks well for their custom models, though again, I haven’t experienced their custom line-up first-hand. The fit is faux-custom, comfortable and well-sculpted, well-sized for such a comprehensive array too. I find it to offer great noise isolation with its fully-sealed design. 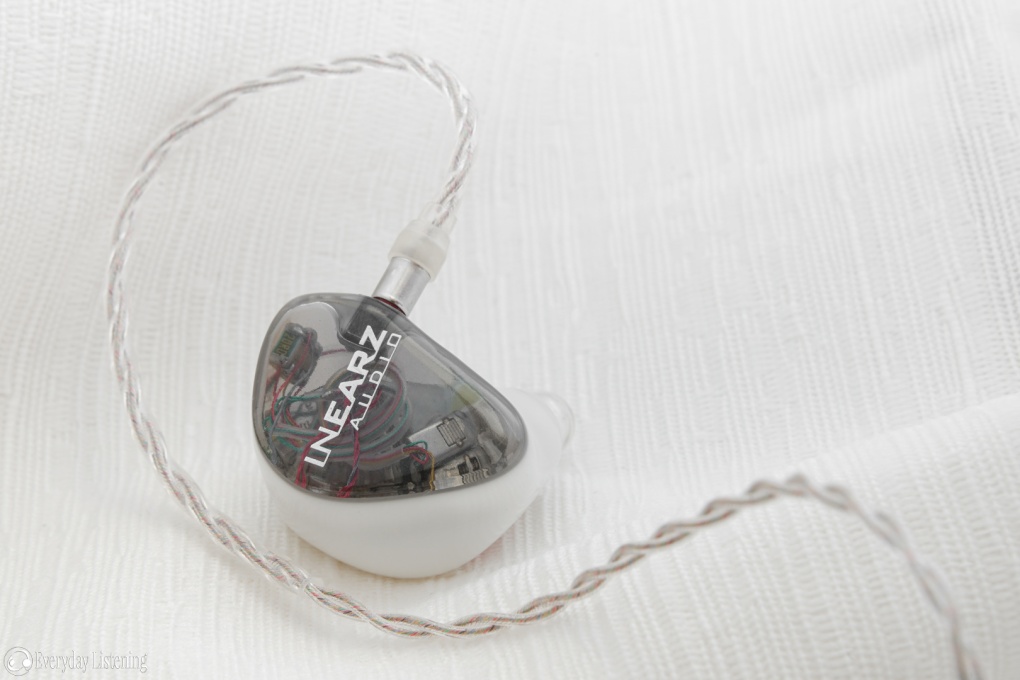 Intriguingly, Inearz is using a proprietary T2 connection system for their cables. It vaguely resembles MMCX but with a more solid surround, designed for use in harsh environments with no intermittency during heavy use, it’s also said to be IP67 waterproof. I found the connectors to offer tight tolerances and solid connection during initial testing. Furthermore, the included Linum G2 SuperBaX cable is ultra-light yet high strength. It’s springy and carries slightly more microphonic noise than suppler units, but this is ameliorated by an over-ear fit.  It has very comfortable pre-moulded ear guides and essentially disappears in use due to its lightweight design. Altogether, a good choice for professionals while bringing ergonomics benefits for enthusiasts too. 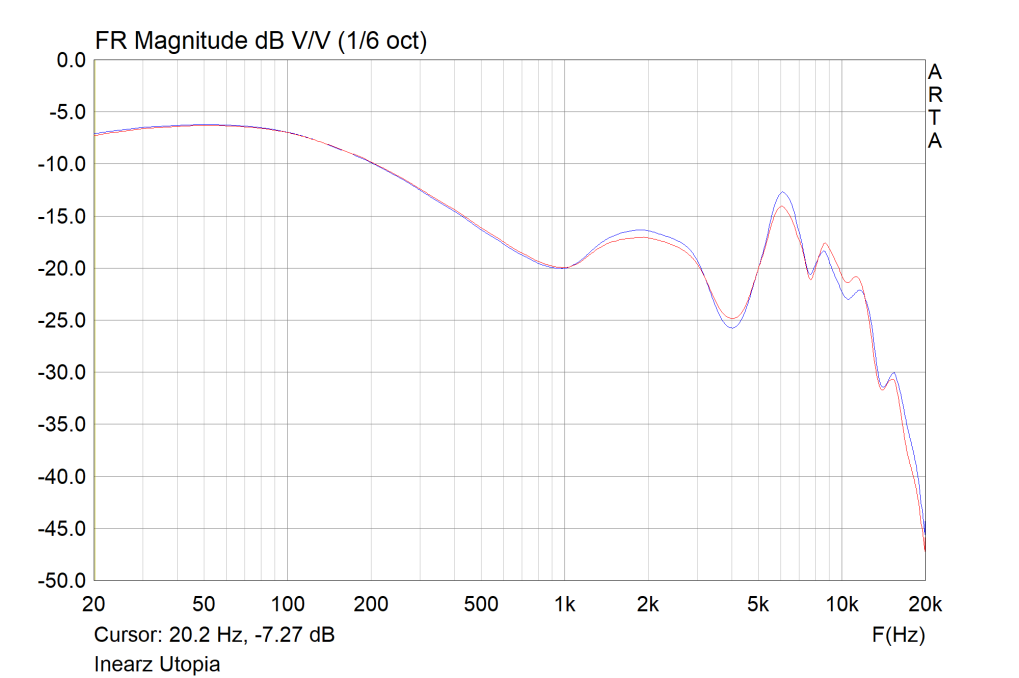 Testing Methodology: Measured using Arta via IEC 711 coupler to Startech external sound card. 7-9KHz peaks may be artifacts/emphasized due to my measurement setup. Measurements besides channel balance are volume matched at 1KHz. Fit depth normalized to my best abilities. Due to these factors, my measurements may not accurately reflect the earphone or measurements taken by others.

The first thing you notice when plugging the Utopia into a quality source is it thunderous, powerful and voluminous low-end. In particular, mid-bass occupies a large amount of its presentation. I received the non-Adelle unit so those equipped will likely be more balanced though, given the level of emphasis here, I would posit that they would remain warm, richly voiced earphones. This precedes a warm, laid-back vocal presentation before a small lower-treble push and enhanced middle-treble air that redeems detail presence, clarity and headroom. The result is a very rich V-shaped signature with bias towards the bass but also one that isn’t dominated by said bass. The Utopia is especially enjoyable with pop, electronic and R&B.

Sub-bass too sits forward, lacking the physicality and hard-hitting nature of a good DD earphone but extending well for a BA earphone to deliver solid slam and rumble. As aforementioned, the mid-bass is the star of the show, showcased in all of its impetuous glory before slopping down sharply through the upper-bass. Bass is clearly of BA timbre, with excellent control and quick decay redeeming surprising definition and separation. Nonetheless, the sheer level of emphasis results in considerable bloat and tubbiness. As such, this isn’t the most natural or linear tuning, nor the most detailed. Rather, the Utopia is lavishly full and decadent, saved by the speed and definition of a good BA setup. Indeed, this voicing makes the Utopia quite an oddity as I haven’t seen an all BA earphone with this much bass presence. Certainly its driver setup grants qualities one would not expect taking its FR at face value.

The midrange, in turn, is quite coloured. In fact, its tuning doesn’t do a whole lot to counteract the added low-end warmth and body. There is a small push through the centre midrange before a drop at 4KHz that heightens density. The result is a thick, full-bodied and warm midrange with just enough definition and clarity to flatter vocals and provide some separation from the bass. Naturally, this isn’t the most revealing presentation nor is timbre especially accurate, but the voicing isn’t off-kilter or offensive in any regard either. Bass does often encroach, but though vocals are quite laid-back, the centre-midrange push in addition to a slight emphasis on articulation ensures they are of ample size to avoid becoming overshadowed. That 4K dip also results in a very smooth voicing without a hint of brightness, rasp or thinness, despite 6K emphasis. However, this does provide additional body in addition to their already full-bodied nature, providing an undoubtedly thick, chesty and lush presentation.

In the context of the rest of its sound, the treble comes across as well-metered to my ear. There’s a moderate peak at 6KHz before a lightly enhanced middle-treble. That said, the top-end on a whole is still laid-back relative to its bass so it’s still quite a smooth and refined performer. There’s good crispness in the foreground with slightly sharper note attack followed by elongated shimmer and decay for an airy, atmospheric sound. The top-end is fairly polite in the grand scheme of things but provides a pleasing level of openness. Extension is impressively strong though due to its generally thicker and less separated sound, the Utopia doesn’t scream high-resolution. There also isn’t a whole heap of sparkle in the highest registers but good fine detail retrieval through the foreground and pleasing background detail retrieval too. Though bass smacks the listener in the face first, the articulate top-end ensures they aren’t missing out on too much of the minutiae either.

The soundstage is, in turn, naturally expansive, tapering off progressively at the periphery and providing expansion just beyond the head. This might be one of those rare instances where there’s actually a bit more depth than width. Surely, the low-end showcases the size of the stage with its sheer volume. However, it also means that though proficient, there isn’t much separation left for other elements, as its swift yet smooth treble transients feel a little bogged down by all the warmth pervading throughout. Nonetheless, there’s good tri-frequency separation and pleasing layering so the presentation isn’t muddled or disorganised. Imaging comes across as sharp to me with accurate spatial positioning and a strong centre image, albeit bassy tracks do suffer from some congestion which interferes with pinpoint localisation.

The Utopia is certainly an interesting one and will be polarising due to its more extremist tuning. Perhaps the Adele version will hold more mainstream appeal, only time and further reviews will tell.  And yet, even the fully-sealed version holds plenty of charm to me as this is a sound that is wholly unique. To clarify, A few years back, Campfire Audio demonstrated that people love quality bass, and in more cases than many audiophiles will be willing to admit, a lot of it. It provides solidity to the sound and intoxicating pace and rhythm; simply put, no other frequency range invokes such a strong physiological response. So where most pursue a brighter, more analytical top-end with a neutral tone and note size delivering strong separation, the Utopia instead carries the thick, warm and meaty sound provided by more consumer-orientated bass lover models reinforced by a much stronger technical foundation. As such, this represents one of the few non-dynamic driver basshead offerings in the high-end space, being quicker, more discerning and less skull pounding as a result. The Utopia is likely voiced for stage monitoring where ambient noises drown out body and bass. However, such a larger than life sound is great fun in the comfort of your own home too.

One of the cleanest and most refined signatures I've heard, the Soft Ears RSV has become a personal favourite
Remember the bog standard dingus buds that came with your first smart device? That's likely what comes to mind when you mention earbuds. We don't picture precision CNC milled shells or custom drivers with tuned acoustic chambers. After one session with Astrotecs new Lyra earbud, it was clear there's far more to the design than cost cutting
Not just a TRI-hard! Starshine offers a warm and natural low end paired with great energy and sparkle up top courtesy of an "aggressive" Sonion electrostatic tweeter implementation
Moondrop Sparks are certified adorable ✔️