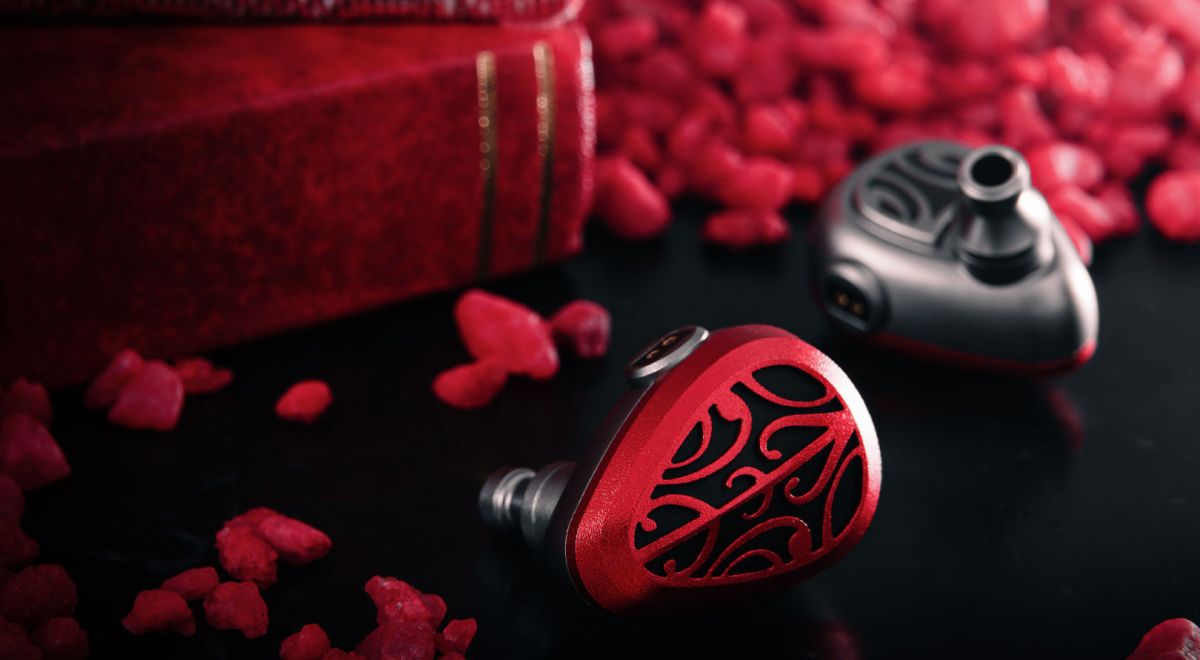 Testing Methodology: Measured using Arta via IEC 711 coupler to Startech external sound card. 7-9KHz peaks may be artefacts/emphasized due to coupler resonance. Measurements besides channel balance are volume matched at 1KHz. Fit depth normalized to my best abilities between earphones. Due to these factors, my measurements may not accurately reflect the earphone or measurements taken by others.

Joseph mentioned targeting a linear sound with an emphasis on the soundstage. Signature to MMR, he hasn’t done to by following a conventional curve, the Gae Bolg is coloured though not to the detriment of overall coherence. At a glance, GB is balanced, lightly warm and liquid smooth, but with a lower-treble bump that retains energy and engagement. Its bass is full and robust instigating a full and lightly warm midrange. Vocals retain clarity and are brought to the fore with a large centre-midrange hump before sizeable upper-midrange attenuation that contributes most to its dense, smooth voicing. The GB is, in turn, a highly coherent monitor and, though not the most linear in an objective sense, the sound does subjectively come across as very well put together. The GB is intended to be MMR’s most accessible model as their all-rounder, but give it a listen and you’ll find it does much more than live up to that task.

I did experiment with a few different ear tips as I felt the GB could do with a little more upper-midrange extension. Of the tips I tried, the Azla Sedna Fit Short provided a slightly more open sound to my ears, however, I found the presentation most involving on the stock Acoustune tips. As a result, I would generally recommend most listeners stick to the stock tips and use others only if you cannot achieve a proper fit and seal.

Upon measurement, I found the GB to much resemble the CFA Andromeda in terms of its low-end tuning. That’s not to say that either model overly resembles the other but does set up expectations. And in listening, I found the GB to be quite an involving performer. It carries a modest sub and upper bass lift that forms a warm, full presentation with enlarged, bold notes. The GB has strong extension for a BA earphone too, permitting a satisfying texture, depth and kick at the very bottom if not much pressure as you would get from a DD IEM. This is clearly an earphone tuned for musical engagement over absolute linearity but executes this with aplomb; and as the midrange is more forward on the GB than the Andromeda, bass comes across as a little cleaner and doesn’t overbear or spill into the midrange. The timbre is not tubby or muddy nor bloated. The low-end appears well-balanced in quantity only being presented with an engaging character. Note presentation is more orthodox for a BA earphone, but with some qualities that heighten engagement.

As one would expect, the low-end is very quick in terms of both attack and decay. Note presentation is highly tactile, presented with a tight, concise impact that I find highly enjoyable when combined with the lifted and well-extended sub-bass. The GB comes across as quite dynamic for a BA earphone as a result, though it’s a snappy earphone too, maintaining a keen sense of timing. In addition, the GB is able to uphold a high level of separation due to its agile performance, perhaps not quite to the extent of something more neutral like the CFA Ara, but there’s no smear and the mid-bass remains highly defined and controlled. While it may not carry the pressure and rumble of a dynamic driver earphone, it effectively retains the high-detail character signature of BA drivers while introducing a less common sense of dynamics and a rich, musical tuning that is easy to enjoy.

In many senses, I am glad for the widespread adoption of target curves. I am personally most sensitive to midrange timbre and these curves provide manufacturers with a rough guideline on how to achieve a natural voicing. In the modern day, especially at these price ranges, few deviate from the progressive 1-3kHz climb and gradual drop off into the treble that simply sounds right to most listeners. The GB is one such deviant, shifting emphasis instead to 2kHz, with a sizeable drop through the upper-midrange. Despite this, it sounds subjectively natural and very enjoyable; its rich, large vocals realised with creamy smoothness. The result is a slightly higher contrast sound, with enhanced definition and articulation that counterbalances the modest lift in body and warmth down low and the increased smoothness and density up top. The GB remains highly coherent. Yet, as its richness is not achieved through bass emphasis or a bolstered lower-midrange, it is able to craft a hearty sense of fullness and an organic, filled-in note structure without compromising separation nor introducing chestiness or muffle. Similarly, its smoothness contributes to an utter lack of rasp, thinness or over-articulation.

The presentation remains well-defined and impressively clean that said. Warmth isn’t over-done, nor is body. Of course, this won’t be mistaken for an open or revealing style of tuning; it is highly smooth that places impetus on coherence, with only its enhanced contrast redeeming focus and sharpness. Returning to my original point, the midrange indeed retains a natural voicing despite the unconventional tuning. The sizeable 2k hump grants vocals especially with flattering size and brings their position forward relative to instruments. Despite this, they remain full and wholly resolved, but do lack an iota of extension up top which would be my main complaint with timbre. If you don’t mind sacrificing a little atmosphere and clarity, the GB’s midrange simply comes across as pleasant and musical with no real glaring faults. I would posit as well, that the qualities of its tuning are not so overt to the listener as when scrutinised by text in this review. The GB once again proves to be a highly musical creature of coherent in the midrange; perhaps not for those wanting great cleanliness and separation, but a powerful vocal presentation that retains high-definition despite its rich, organic timbre.

Clean, crisp and clear, the high-end on the Gae Bolg is enjoyable and nicely resolving. With a 5kHz hump, treble sits on par with the bass and midrange. It appears a touch isolated on measurement, but in listening treble is presented with just a hint of additional energy and clarity. Instruments are crisp and clear yet also very well textured with accurate body and an uptick of smoothness as emphasis falls off above. The transient response is clean and quick delivering a defined and focused foreground detail presentation. In turn, fine details aren’t smoothed over though are perhaps not quite so imminent as on 6k emphasized earphones. There’s a pleasing sense of shimmer and cymbals decay naturally giving the GB a mostly natural and organic presentation that delightfully complements the rest of its sound.

I am also a fan of the tuning above, with a mostly linear and neutral middle-treble with just a hint of emphasis providing pleasing headroom and air. This helps to retain atmosphere and openness, especially pertinent given the generally smoother and denser midrange presentation. It isn’t bright, splashy or strident in the slightest, the background is immaculately clean for a well-contrasted presentation and defined layers. Top-octave extension is a good performer though not outstanding at this price. There isn’t huge upper-harmonic energy, but micro-details are well-present and resolved, distance portrayal is convincing and there’s some sparkle that enhances the presentation. The Gae Bolg is completely unfatiguing over long listening sessions but carries plenty of energy and nuance to keep the listener engaged.

The Gae Bolg offers a reasonable sense of expansion, with average width for a high-end IEM but stronger depth forming a well-rounded stage overall. This sets the stage for a multi-dimensional imaging performance, some of the most immersive I’ve heard in a while. Vocals anchor with a strong centre image while backing instruments and vocals stretch laterally into organised layers. And the layering here is superb, truly some of the best I’ve heard from an in-ear. This is most noticeable with backing vocals such as those on John Mayer’s “New Light” around 1:50, each layer is highly defined and separated. This also isn’t the usual case of foreground/background, the GB offers a gradient of layers spreading out laterally in addition to coronal projection as well.

Accordingly, the presentation is very three-dimensional and holographic, and localisation is pinpoint accurate. Separation also performs at a good level despite the generally full note structure. Note presentation is quick and defined so each small detail appears well isolated and easy to discern from neighbouring elements. Again, it isn’t hyper-separated with more emphasis on coherence, but admirable all considered and not detrimental. The Gae Bolg’s multi-dimensional imaging and layering are standouts even in a price range littered with the exceptional.

The Gae Bolg has a moderate 25ohm impedance and unspecified sensitivity. It is not an especially difficult earphone to drive, but does require a little more volume than most high-end BA monitors. Still, so long as the source is relatively clean, power is less of a concern here.

To assess, I compared between the Hiby R6 (10-ohm) and Shanling M2X (1-ohm) via in-line switcher, SPL volume matched. This revealed that the GB is less sensitive than most to output impedance, perhaps due to its higher impedance nature. The earphones were surely enjoyable to listen to from both sources with only a slight dip in bass on the Hiby that was somewhat compensated for with its slightly fuller sound. The Shanling provided a hint of additional sub-bass extension for a more authoritarian slam at the very bottom and the midrange sounded slightly more coherent. Otherwise, there were minimal differences in the overall balance and presentation, the GB can be enjoyed from a higher impedance source, preferably still in the single-digits that said.

I then hooked up the switcher to my THX789 desktop setup and compared to the M2X. There was minimal difference in sound signature between the two sources, bass was slightly more dynamic on the THX789 but only under scrutiny. The soundstage was noticeably larger on the THX789 but imaging and layering were immersive on both. The GB does not require an especially powerful source to flourish. That said, I would surmise that it has a slightly higher sensitivity as the GB did pick up a little hiss on the M2X. This wasn’t audible anywhere around my usual listening volumes, but a clean and quiet source is recommended.

Thankfully, the GB is not overly source sensitive, tolerating higher output impedance and lower driving power well. In turn, it will be served well by a wide variety of sources, even portable dongles and BT receivers such as the Fiio BTR5 so long as the noise floor is not too high – the average dedicated source will do just fine in this regard at reasonable listening volumes. Of course, the soundstage will scale very well with a more resolving source as shown by the desktop source pairing, the GB is able to take advantage of the added resolution and space well. In terms of tonality, I did prefer more neutral sources such as Topping’s NFCA-based amps and those based on THX’s chips. I found them to offer a bit more separation, especially within the bass, where warmer sources like those from Schiit and the Hiby sounded slightly too smooth in the mid-bass, losing definition.

A big technical jump with the same linear tuning, the Z7 is another leap forward in TWS design
Though one of the most modular earphones out there, the FD5 is extensively ear pleasing straight out of the box
Bold design meets musical sound on Burson's all-in-one Playmate 2
Cayin's latest IEM, the Fantasy, is their first DD earphone sporting a Be driver and dual magnet, dual chamber design