Xiaomi are an interesting company, you might have heard about them through their renowned Piston earphones or perhaps their amazing smartphone sales in China. But outside of phones and accessories, it may come as a surprise that Xiaomi also offer an array of home appliances; though unfortunately, few of them make their way out of China.

One of the most standout products is the Xiaomi Yeelight, a pretty neat smart lamp that carries a welcoming RRP of ~$65 AUD. I purchased mine from Hong Kong for $37 AUD, perhaps due to a pricing error, but they can commonly be found for similar prices during Gearbest sales. To my knowledge there are no fakes unlike the Xiaomi powerbank and online buying should be safe, of course I take no responsibility for any damaged or fake goods you may receive.

Are smart home appliances a gimmick or an augment and can a smartphone manufacturer such as Xiaomi compete with juggernauts like Samsung in the home appliance space? These are my impressions of the Xiaomi Yeelight and smart tech in general after long term use.

*There are various Yeelight products, the model I`m reviewing is the bedside lamp not the globe.

The Yeelight has a more rustic un-boxing than other Xiaomi products, granting it a homely aura from the get go. The unbleached cardboard box is mostly unremarkable, with just the Xiaomi logo on the top right and a few sealing tape strips on the sides. 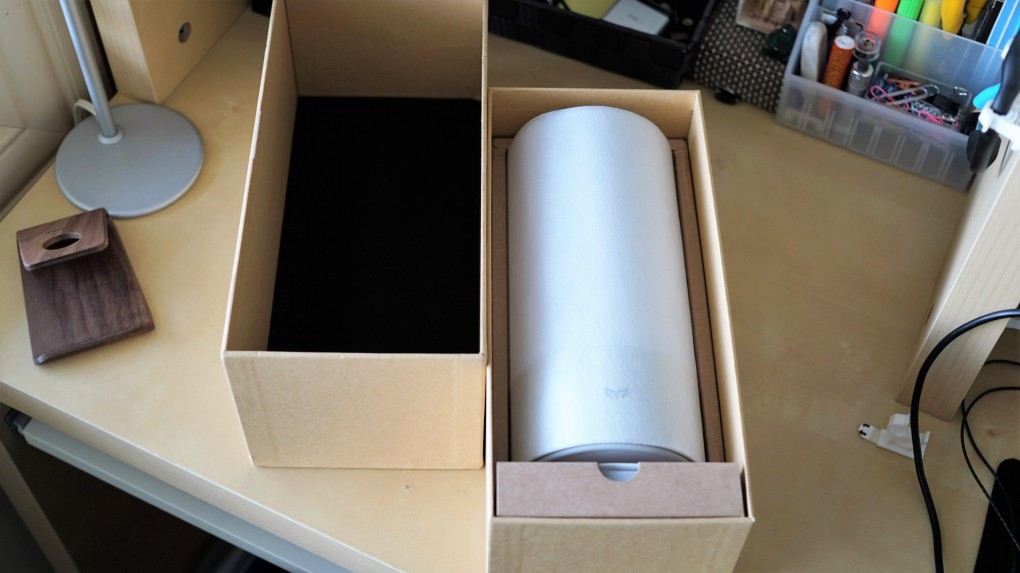 Sliding off the front cover reveals the Yeelight in a soft fabric sleeve with the power adapter and papers in another box just below. Being a lamp, I was more concerned than usual about its condition after a month of shipping on the slow boat from China; luckily, the Yeelight is well secured within a cardboard frame and soft foam lines the upper cover of the box. The lamp arrived well packaged and protected overall.

To my knowledge the power adapter is only available with one plug, for other countries you`ll need to use an adapter, it supports 110-250V. The Lamp has no internal cell and only operates off AC. For the price I can`t complain, but a battery operated lamp would add some additional functionality not to mention a lot more flexibility of placement.

A protective film is applied to the top face of the lamp, it has a matte texture and basic operational instructions in Chinese. I actually found the lamp much easier to use with the film on since the glossy top of the lamp is quite tacky and the lamp is controlled mainly through swipes. Although the instruction papers and stickers are in Chinese, the lamp is still very easy to use, there are plenty of youtube videos outlining the various touch features though it is easily controlled via a smartphone as well (app in english). 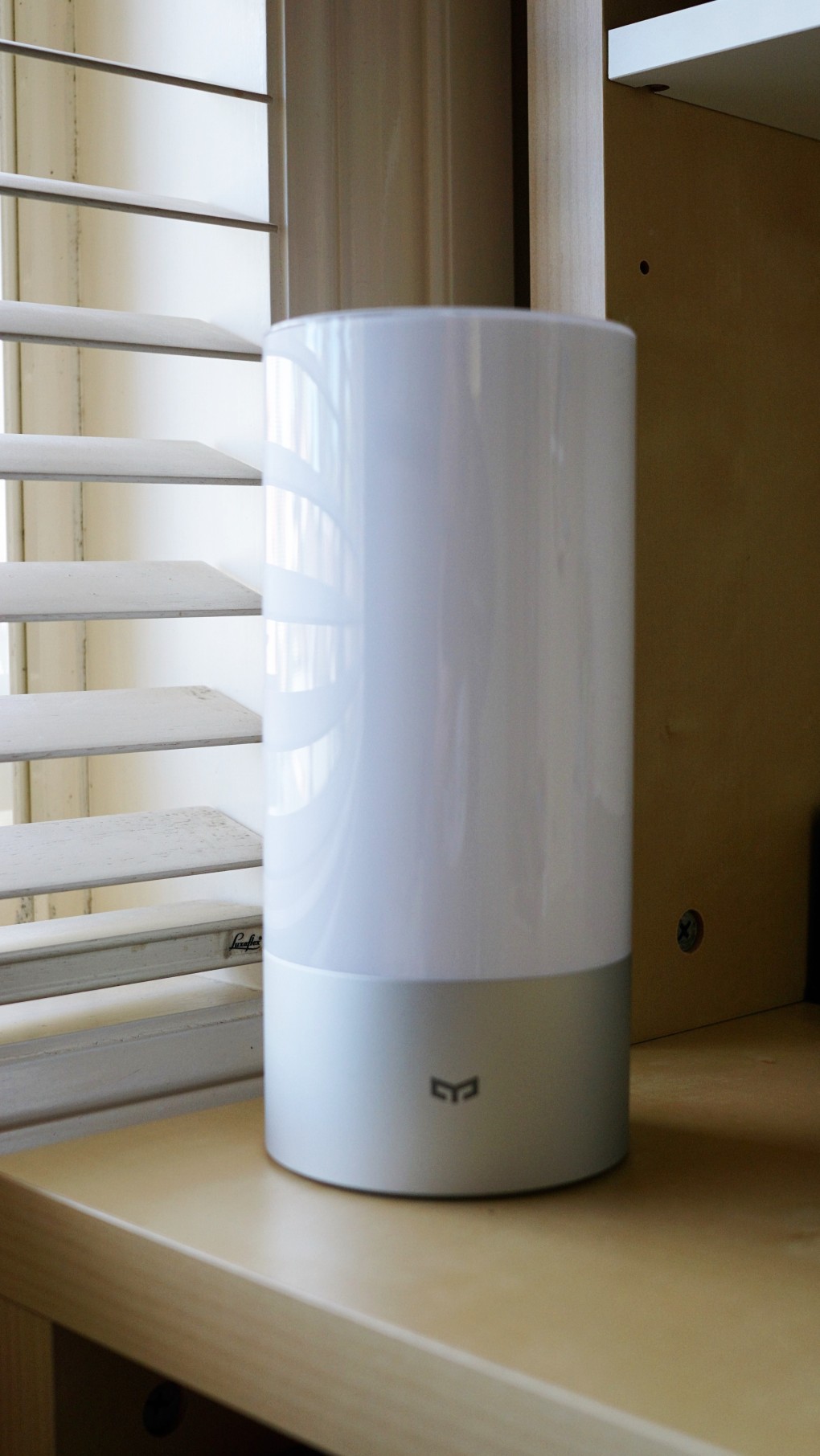 The Yeelight has a minimalist design, it`s essentially just a two tone cylinder. There`s a few features that add intrigue, for one the top face is actually a touch panel that controls the lamp via gestures and the aluminium base acts as a heatsink for the OSRAM LEDs and drivers. In addition to the touch panel, users will find two buttons on the top face; a central power button and a smaller button which alternates between the lamp`s 3 modes.

The buttons are easily distinguished, the power button being much larger and slightly concave. Both are nice and clicky with good feedback and accurate response. Both functions can also be controlled through a smartphone via the Yeelight app (supports Android and IOS). 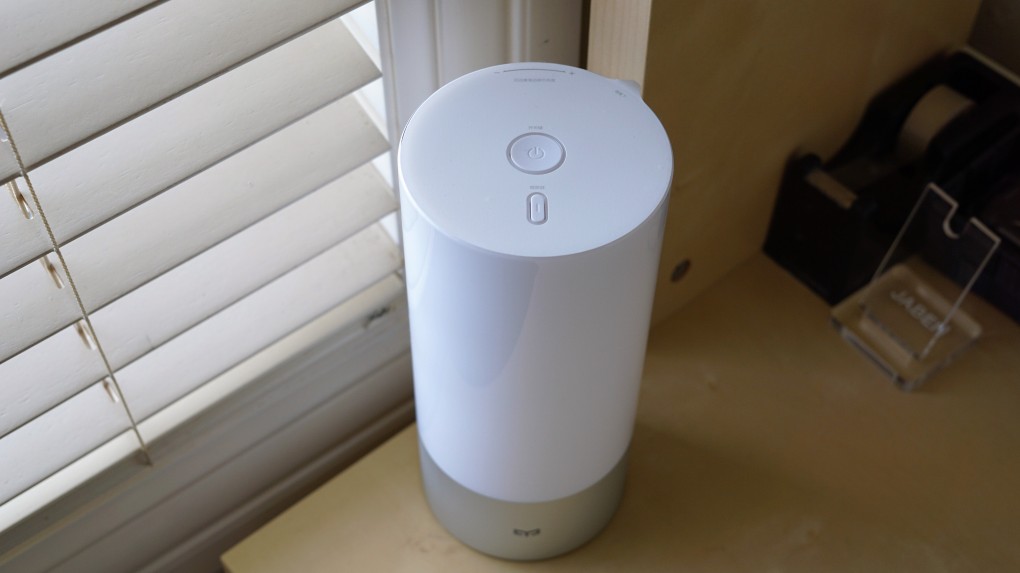 Given the relatively low price of the device, the body of the lamp is not glass but rather a gloss plastic. It feels sturdy, there`s no flex at all but it still doesn`t feel like a high end or luxurious item. The plastic also tends to generate static, attracting dust. Luckily the white face doesn`t accentuate marks or dust nor is it particularly visible when the lamp is illuminated and a quick wipe down with a microfiber cloth easily returns the lamp to like-new sheen. It would have been nice to frost the exterior for a less mark prone texture but Xiaomi seems to have frosted the interior instead. It grants the LEDs a nice tone but the lamp still feels like gloss plastic.

The LEDs have a very nice illumination effect, the colour is richer at the base and cooler at the top granting the lamp a nice contoured look when on.

The aluminium base is well finished with a matte texture. The Xiaomi logo is laser etched into the front granting the lamp a nice minimalist look. The plastic and aluminium are well mated without rough seems. Despite doubling as a heatsink, the lamp has never gotten hot or even warm in my usage, it seems to be quite efficient. 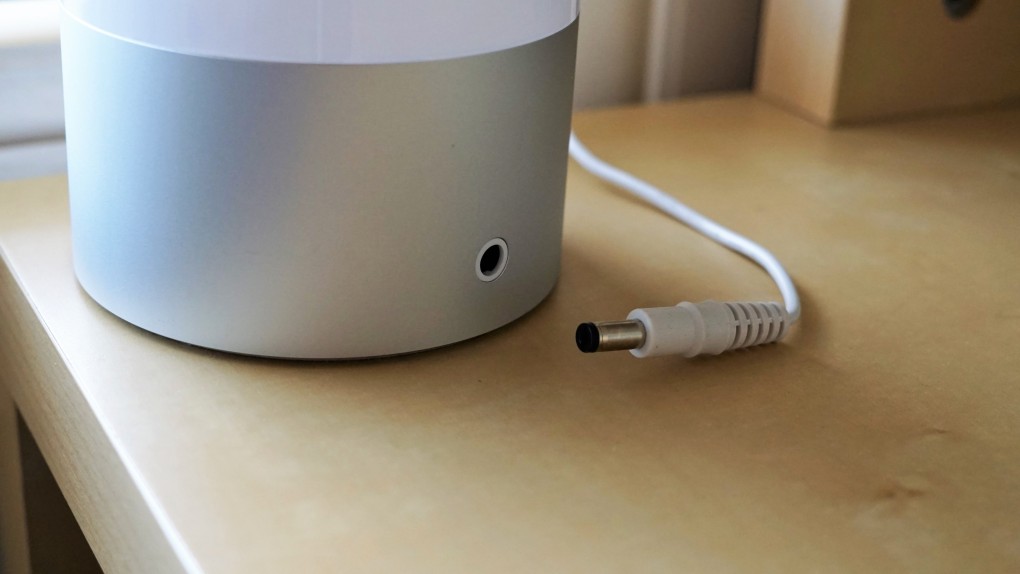 At the back is the power port, the plug is well relieved and short for flexible placement.

A rubber rings runs around the base to provide some extra grip and stability, Xiaomi list a few specs on the bottom including colour temperature range, input voltage, etc. Everything feels well finished and well constructed in general, the lamp also looks subjectively classy and will well fit most setups.

The brightness adjustment mechanism is very smooth and satisfying to use. Running your finger around the perimeter of the top face adjusts brightness, it ranges from night light dim to reading light bright.

It`s a nice desk lamp, but it won`t adequately brighten an entire room. The LEDs are RGB supporting around 16 million different colour options. Users can cycle between three modes using the top button: But apart from the gestures and buttons on the top face, the lamp can also be operated wirelessly through Bluetooth connection using the Xiaomi unified home app or the dedicated Yeelight app. I know a few reviewers had some translation issues but Xiaomi appears to have remedied the GUI niggles in recent updates, both are in English and are perfectly understandable. The app presents pretty well and runs smoothly for the most part. Initial setup is a bit over complicated requiring the user to make a Xiaomi account and the login crashed a few times before allowing me to even use the app. Once logged in however, the app has been stable and straight forwards.

The aforementioned features, brightness, mode, etc can be controlled through the app as well as an additional scene mode which can match the colour of the lamp to an image (or preset provided by Xiaomi), useful if you want the lamp to integrate perfectly into a setting.

There are also morning/night functions, increasing the brightness at a set time or dimming and warming the light after a set time, simple but welcome. The app also enable users to update the firmware of the lamp, providing additional features and gestures. Another thing to note is that the lamp needs to be on to pair and alter settings.

One of the main features of the app is the scheduling features though unfortunately it`s rather spartan. You can only add 4 times and there`s no option to change brightness or colour, you can only choose what time the lamp turns on/off. But even as it is, the scheduling works fine and you don`t need to be constantly paired as the lamp will remember the settings from internal memory.

It`s also possible Xiaomi will add more features to the schedule functionality as the Yeelight app is regularly updated. For instance Xiaomi has added a timer function in the latest update; holding the touch panel and power button for 2s will set the lamp to turn off after a specified period of time, great for use as a night light.

The Yeelight is easy to use, not quite as straight forward as it could be due to the Chinese manuals, but in return it`s about as feature packed as a lamp could be. Of course it would be nice to have proximity based features such as an auto on feature when the paired smartphone is in the same room, but such features would likely require more sensors and bring an increased price. The use of an app based GUI opens the possibility of both software and firmware updates, enabling new features and enhancements to be easily pushed to the device. Combined with a modest entry price, the Yeelight makes for a great appliance with a tasteful amount of smart integration.

I was under the impression that this lamp would be a gimmick, but it has proven to be surprisingly practical and hassle free. Of course at the end of the day, it`s only a lamp, but you`ll be hard pressed to find one more feature packed and satisfying to use. The RGB functions are snazzy and the smart integration works as intended. It`s also surprisingly reliable for day to day usage, my previous smart tech experiences have all been more effort than they`re worth. Not the Yeelight; it`s first and foremost a good lamp with smart features added on top enabling the Yeelight to remain practical and also relatively budget friendly (especially when on sale). 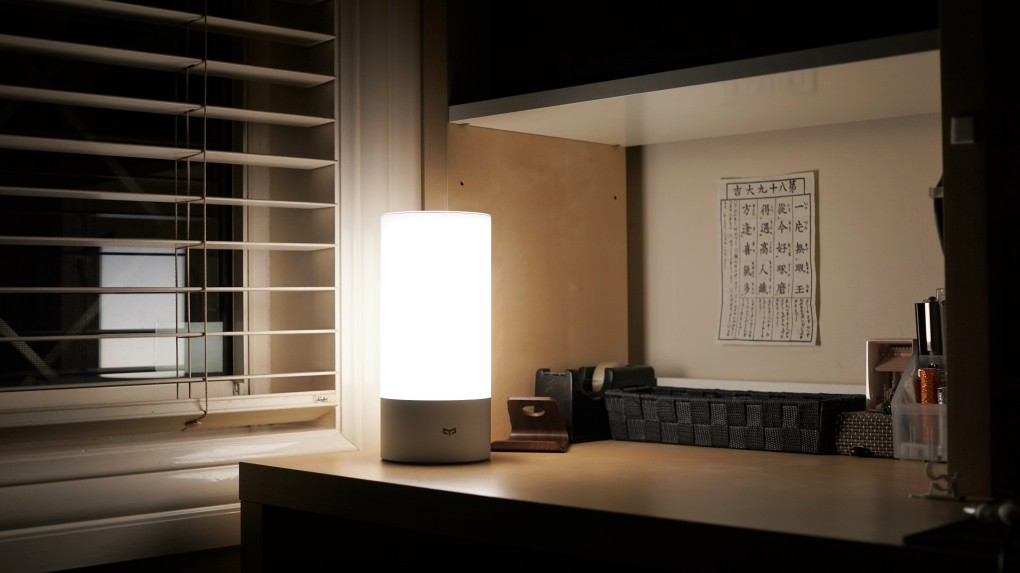 Most of the smart features are actually very useful while the more gimmicky colour options remain fun to have regardless. The touch gesture functions are especially satisfying to use though Xiaomi should have made the top panel matte instead of gloss to provide a smoother touch. The lamp isn`t super bright, but will adequately light a desk and offers plenty of brightness for reading too. The option to warm the hue of the light is great at night, I usually keep it on a warm white which works wonders for fatigue during the late hours.

Design – 8/10, Minimalist design is simple but well presenting. The aluminium base looks great but the plastic body, whilst solid, does not carry the same premium feel. A matte finish or glass externals would have made the Yeelight much more desirable though the build is still fantastic for the asking price. The top touch panel should have been matte, it`s best to leave the matte adhesive cover on. Buttons are clicky and responsive.

Usage – 9/10, App and gesture based functions work reliably. Pairing is quick and simple but only works when the lamp is on. The lamp remembers settings in its internal memory. Scheduling is great for automated use but lacks adequate options. Colour flow, scene and hue modes can enhance the look of any scene.

Overall – 9/10, The Yeelight is a great lamp for those looking for a few automated features such as scheduling as well as a few fun features such as colour flow and touch gestures. It`s also a great entry into smart home tech, the options are straight forward and the app is streamlined for the most part. It`s a nice appliance well complimented by tasteful smart tech additions.