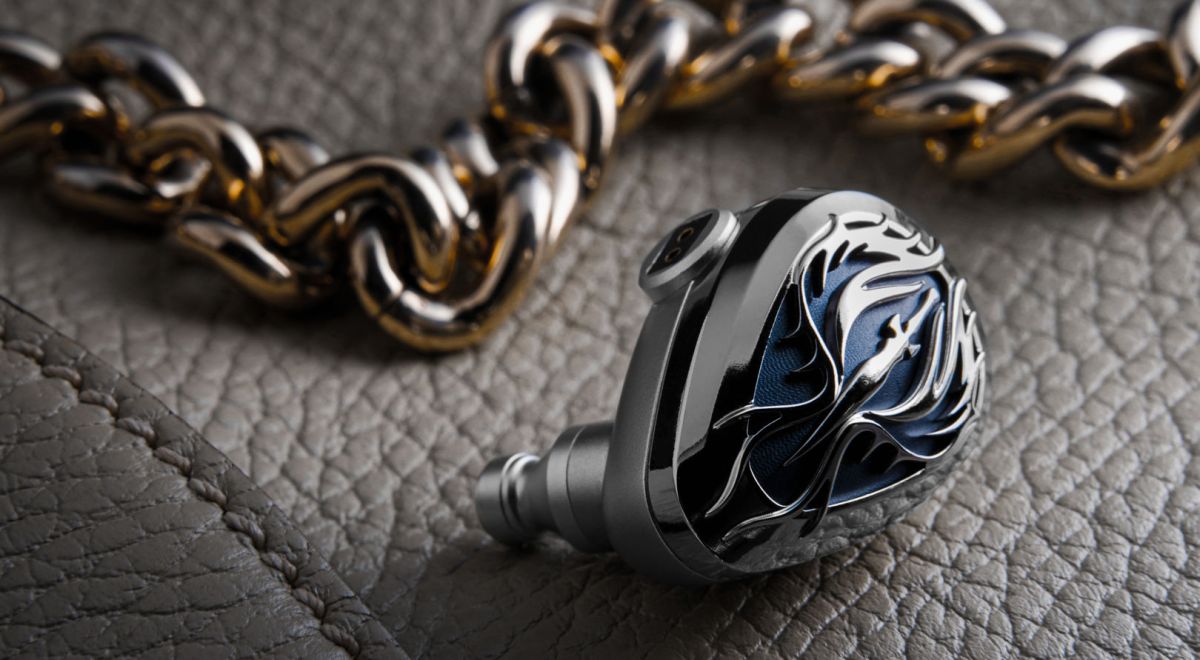 MMR Gae Bolg ($1199): The Gae Bolg carries similar characteristics of the Balmung, similarly being structured and multi-dimension, but it has a more balanced tuning overall – think of it as a Balmung lite. The Balmung has a bigger, fuller bass. While both have a similar, warm-leaning style of tuning, the Balmung has a larger lift through the mid and sub-bass especially. It extends deeper and delivers a fuller and far more impactful mid-bass. The Gae Bolg is cleaner and more balanced. It sounds flatter and appreciably more separated. The Balmung is more dynamic and engaging and does have more resolving power too. Specifically, it has more defined, textured notes but as they are bigger, this isn’t the first quality that jumps out to the listener.

The midrange is similarly executed on both, with a lower-mid nadir for separation and ample peak for pinna gain. The Gae Bolg peaks at 2kHz giving it a more even-handed midrange presentation, while the Balmung has a bit more clarity and female vocal bias with a 3kHz peak. Both have a 4kHz nadir for density and structure, the Balmung to a lesser extent to avoid veil in lieu of its bigger bass. The Balmung also has a larger lower-mid dip operating to a similar effect. The net result is a similar style of presentation between the two. The GB is slightly more balanced with a much cleaner tonality and greater vocal presence. The Balmung has a good resolution bump realised through a warmer, slightly more laid-back yet more powerful voicing.

Treble tuning has similarly been executed in a similar fashion, both having 5kHz emphasis. However, the Balmung really pulls ahead here with regards to both tonality and technical performance. As its upper-midrange to treble transition is more linear, the Balmung has a noticeably more natural instrument body and texture. It also has a cleaner transient response with a more defined leading edge and better separation during complex passages. Above, both are on the darker, cleaner side. The Balmung has a noticeable advantage with regards to micro-detail retrieval and extension, delivering greater headroom and complexity. Altogether, this permits a noticeably larger stage and imaging qualities such as positioning, dimension and distance are all amplified to the next level. Albeit, as will become a theme, the more balanced GB does separate slightly better.

Final A8000 ($2000): The A8000 provides a more revealing sound tuning and tonally neutral sound. It provides a bit more depth and power in the sub-bass with a more defined, visceral rumble. Its bass on a whole isn’t as full nor as warm but is more weighted with a bold over rounded structure. The Balmung does have the faster bass which means that though it is much fuller, it isn’t less defined. It provides much more power in the mid-bass and noticeably more texture with the A8000 being focused more on dynamics. That said, separation is clearly better on the A8000 if at the expense of punch and fun factor.

The midrange is more forward on the A8000, more neutrally toned and sized. This makes it difficult to compare the two as they possess opposing characters. The A8000 has better separation with more ether surrounding each element and it simply has a more revealing character. In terms of resolution, it also brings out a little more fine detail than the Balmung which is exacerbated by its higher-clarity tuning. The Balmung is more coherent, structured and coloured. It has bigger notes and vocals, and a smoother, more forgiving delivery. Despite this, its resolution of fine detail is almost as high and it layers just as well.

The A8000 is quite a bit brighter up top, especially around the lower treble. In turn, it has a lot more bite and crispness though also a thinner, more brittle note presentation. The Balmung, to my ears, provides better detail retrieval. It has a more natural body and decay alongside being less over-sharpened. This allows it to separate complex passages slightly better and bring out more fine detail. The Balmung has a darker background and a bit more micro-detail despite not being as treble-forward. It also has a wider soundstage, the A8000 being deeper. The A8000 provides sharper directional cues and greater separation while the Balmung has more defined layering.

Soft Ears RS10 ($2099): The RS10 upholds a highly balanced, reference-target tuning that serves as a foil to the coloured and vibrant Balmung. The Balmung extends equally well to the RS10 and delivers a bigger, fuller bass both in the sub and mid-bass. It has a lot more punch and volume to its low-end. The RS10 meanwhile, is much cleaner through the mid-bass with more sub-bass focus. It has a quicker, tighter low-end with higher definition and separation.

The midrange on the RS10 is slightly more forward, especially relative to its less present bass. It has a dead neutral tonality and note size. The Balmung is higher contrast, it is warmer, fuller but also more articulate. In terms of raw resolving power, the RS10 performs incredibly well, slightly better than the Balmung. Again, the full tonality contributes to the perception of small details on the Balmung which has less separation in favour of a more musical, forgiving presentation. At the same time, I can see some finding the RS10 intense, a quality the Balmung lacks entirely.

Empire Ears Odin ($3399): The Odin offers an engaging tonality atop a highly capable tribrid platform. The Odin offers a more deep-bass focused low-end and just a smidge less emphasis overall. Its biggest advantage here is its deeper extended, more pressurized sub-bass which delivers a more physical, defined rumble. The Balmung has a bigger, fuller mid-bass and slightly quicker decay giving it much more punch and impact in this region. The Odin is cleaner tonally and slightly more separated, it has a bit more separation and less rounded notes.

The Odin has a thinner, clearer midrange chiefly due to its less present mid and upper-bass, and it occupies a similar position to the Balmung. As is becoming a recurring theme, the Balmung is warmer, full and more structured. It has better layering and bigger, more lush vocals. The Odin is clearer and cleaner. It has a more revealing character. The Odin is more articulate and has an edge on resolving power, bringing out more fine detail. Meanwhile, the Balmung sounds more complete, being less raspy that some may prefer. It is denser and less intense whilst providing almost as much resolution and similar spatial nuance.

Up top, the Odin has a brighter top-end both in the lower and middle-treble. It is airier and notes have a thinner body. Despite this, it delivers excellent focus for an EST implementation, the transient response is cleaner and faster, the leading edge is more defined and fine detail retrieval is superior. The Balmung has a more grounded, cleaner presentation. It has a more natural sense of body and decay with a darker background. The Odin has greater sparkle, air and headroom, bringing small details further forward. However, in terms of raw information, both resolve background details similarly well. This makes it more of a personal preference on which you prefer. The Odin does have a slightly larger soundstage and better separation due to its style of tuning. Meanwhile, the Balmung has slightly more holographic imaging.

Through collaboration with photographs and reviews, I’ve been lucky to get to know Joseph and his plans a little better. In particular, it seems curious why he would begin a new endeavour with MMR despite the successful reception of Jomo Audio. He espoused that the new brand permit greater creative liberty both in design and sound; both being exemplified most by the Balmung. This is Joeseph’s mad science experiment gone horribly right. The Balmung is a unique and coloured creation, with zero pretense of balance or even direct competition to what is already available on the market. Joe’s expertise, experience and perseverance with the newly redesigned universal model bear fruit with regards to resolving power and unique colouration that you won’t find recreated by others. The Balmung is an explosion of fun-factor yet somehow manages to balance clear, well-resolved bass and a highly detailed treble with a ludicrous bass response. This is a beautifully formed, truly masterclass basshead-style IEM and while that means it falls behind market leaders in versatility, on tracks where it hits, be ready for a home run.

The Gae Bolg is available from Metal Magic Research (International) for $2699 USD at the time of writing. I am not affiliated with MMR and receive no earnings from purchases through this link.

Billie Eilish – dont smile at me

Dirty Loops – Next To You

Missy Higgins – The Sound of White

TALA – ain’t leavin` without you

The weeknd – After Hours

Vampire Weekend – Father of the Bride

Ovidius' first headphone showcases some impressive metalwork and boasts a huge planar driver. But is that enough to beat the main players in such an established market? Stay tuned
Meze adapts the style, pizzazz and house sound of their over-ears into a compact IEM chassis. One of the company's most stunning designs yet!
Soft Ears new model blurs the lines between the premium brand and the more affordable Moondrop. However, the performance is far more high end than the price may suggest. Another cracker of an earphone from Soft Ears!
Astrotec's new flagship is not an IEM you want to miss! The tuning is radically improved and the titanium shells are a work of art. Expect good things in my full review coming very soon!